Home
Stocks
The Tell: For municipal defaults, booms are just as dangerous as busts
Prev Article Next Article 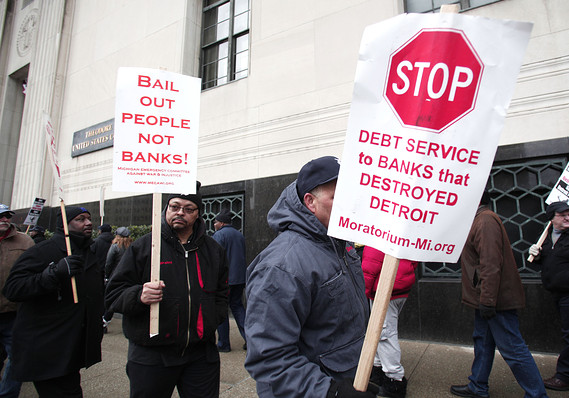 Over the past several years, the longstanding idea that municipal bonds MUST, +0.26%   are risk-free has been sorely challenged. Bondholders have taken haircuts in bankruptcies from Stockton, California, to Jefferson County, Alabama. Creditors have spent years locked in negotiations with the government of Puerto Rico, and many analysts are nervously watching growing cost burdens in budget-strapped cities like Chicago.

Local government defaults are often seen as a reaction to downturns in local population or economic activity, like the years-long implosion in Detroit. But a new research paper suggests that municipal defaults are just as likely to happen in the context of a boom in productivity or population as in a bust.

The working paper, published by the Richmond Federal Reserve Bank and wrote by one of its researchers, Grey Gordon, along with Pablo Guerron-Quintana of Boston College, put it simply: “In response to rapid population growth, cities overborrow expecting future entrants to help repay the debt.”

That idea isn’t an academic hypothetical. The populations of three distressed California cities — Stockton, San Bernardino, and Vallejo — all had significant population growth in the years leading up to their defaults, the authors noted.

And local governments are in the same boat as Hemingway’s hero: they go bankrupt two ways, gradually and then suddenly. In “boom default” cases, the authors write, population and productivity growth remains strong right up until about a year before the municipality decides it has no choice but to default.

During that time, the local government’s debt load per person grows, as do government expenditures and taxes. The authors offered Detroit as an example. In the early 2000s, even as the overall economic situation in the city was worsening, the city had what the authors consider an “optimal” debt level, of about $7,000 per person.

“However, Detroit’s debt continued to grow, and at the start of the financial crisis was around $10,000 per person,” they wrote. “More importantly, when productivity sharply fell in the financial crisis, precipitating the General Motors bankruptcy, the optimal response was to cut expenditures and — to a lesser extent —taxes, reducing debt per person by $750. In contrast, Detroit raised taxes and expenditures simultaneously, ultimately increasing debt per person by $2,500.”

Related: A tax break to hasten gentrification? Opportunity Zones may miss their target

Negative shocks to productivity cause fewer people to migrate in to the local area, increasing per-person debt, setting up the potential for default. Among the examples the researchers studied, declines in productivity average nearly 12%, they calculate.

“A necessary ingredient is that the city must be leveraged enough to make default worthwhile,” wrote Gordon and Guerron-Quintana. “This is where overborrowing plays a crucial role in generating boom defaults. By keeping cities in debt even after long periods of growing productivity, even high-productivity cities are at risk of default.”

Critically, cities experience population declines after they default, losing on average 10% of their inhabitants within five years, driven both by an increase in residents leaving and a decline in the number of new arrivals.

See: Four years, $13 million and dozens of hands: How ‘affordable housing’ gets made in America