Many investors go to business school to improve their investing prowess. They might as well study psychology.

Exploiting the perennial character flaws of other investors is a key path to market-beating returns. It certainly helps explain the outperformance of the YCG Enhanced Fund YCGEX, +0.64%.

Such persistent outperformance is rare. So picking Yacktman’s brain to see what we can learn and use makes sense. Here are five lessons from the fund manager, including a few that have little to do with numbers and everything to do with the foibles of human nature.

“The average investor has a get-rich-quick mentality,” says Yacktman. “Combined with overconfidence, this leads to constant overpricing of riskier, more volatile stocks, and underpricing of high-quality predictable businesses.”

Yacktman prefers “boring” companies. He likes stable cash flows, and highly predictable returns on tangible assets in quality businesses. Not the stuff of market frenzies. But it leads to good companies. Boring is good.

Examples? While you’ve heard about popular names like Facebook FB, +1.16%, Amazon AMZN, +0.10%  and Alphabet GOOG, -0.95% GOOGL, -0.95%, you may not know CBRE Group CBRE, -0.14%, one of Yacktman’s favorites. CBRE Group is in the boring business of commercial real estate sales and property management. Its business is shifting toward the more predictable recurring revenue streams from property management; CBRE is a top brand among Fortune 500 companies looking to outsource property management. That brand power and the outsourcing trend in property management help CBRE shareholders.

Another dull company this money manager likes: Moody’s MCO, +0.20%, which is in the insomnia-curing business of rating bonds. Moody’s has a powerful brand. Its fees are relatively low compared to the overall cost of issuing debt and the amount that companies save on interest rates when they have a Moody’s rating. Moody’s has a rich data set of historical bond ratings and performance, which gives it an edge over potential start ups.

Yacktman thinks most investors get too discouraged by short-term economic and political issues or temporary problems at companies. This regularly creates opportunities.

“Because investors are short-term oriented, they don’t want to wait around in what they view as a ‘dead money’ stock,” he says. “When investors say ‘the long term is clear but right now it is dead money’ my ears perk up. Those tend to be the best opportunities. There are advantages to being a long-term thinker.”

He cites Alphabet as a great example. Its stock is currently held back by fears about antitrust actions and regulation. Yacktman believes these worries are overblown. He cites misplaced concerns about similar issues facing Microsoft MSFT, +0.15%  starting in the early 1990s.

“The settlement was years later. The fine was small. And the stock went up a lot. There is precedent that regulatory fears initially are overblown,” he says.

Another example: bank stocks still held back by worries about declining and low interest rates that can hurt bank returns. This has led to excessive pessimism about banks, which he is happy to exploit. Here, he likes Wells Fargo WFC, +0.34%  (WFC), JPMorgan Chase JPM, +0.64%  and Bank of America BAC, +0.06%. They look cheap. Balance sheets are in good shape. And they are growing deposits at a healthy clip. 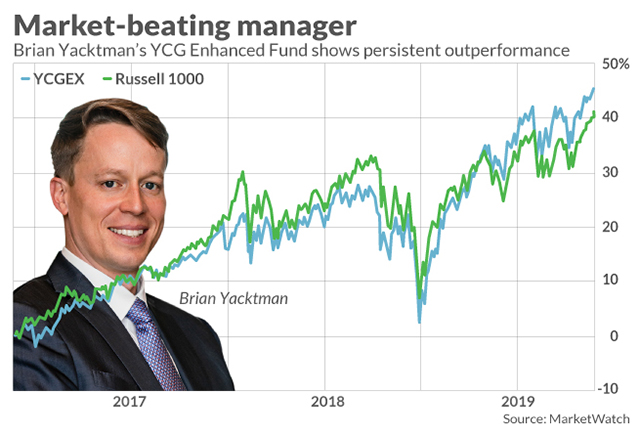 Competition means that almost every business sees pricing decline over time. “This wreaks havoc on investor returns. We like to focus on the rare global champions that have enduring pricing power,” says Yacktman.

Pricing power can derive from having a dominant position. Google is an example. “Google has dominant market share everywhere but China. The European Union’s antitrust report on Google was more of a report on why to own Google,” he says. Alphabet has pricing power in advertising because it is so good at targeting ads. “Only 2% of users click on the second page in Google searches. If you want your stuff to show up on the first page you have to be willing to pay,” he says.

Brands also attract customers because they give us short cuts in life. For the time-famished, they are the fast track to trustworthy products. Yacktman owns a big position in Nike NKE, +1.10% because the brand plays this role.

Brands also convey status, association with social groups, and personal worth. Nike is a good example, because it invests so much in connecting its brand to celebrity athletes. As globalization continues, brands like Nike serve as an international “language” conveying status, and telling us who we might want to associate with, around the globe.

CBRE has brand power in commercial real estate. That makes the company the choice for midlevel managers. “CBRE is the easiest, safest decision if you are charged with opening a new office,” says Yacktman.

5. Hitch a ride on global growth

Yacktman also likes companies that are “indexed” to GDP growth. These companies have a strong position in goods or services that people buy regularly over time. This creates natural, long-term growth.

Here he cites Moody’s, Mastercard MA, +0.30%  and Visa V, -0.08%. Or consider Google. Over the long term, advertising spending has generally held steady at around 1% of GDP. So while Google is growing by taking market share, it also gets a boost from the steady march of global growth in the background.

At the time of publication, Michael Brush had no positions in any stocks mentioned in this column. Brush has suggested GOOGL, MSFT, WFC, JPM, BAC, NKE, and MA in his stock newsletter Brush Up on Stocks.

Now read: Turn yourself into a better investor by learning from hedge-fund star Jim Simons’s successes and failures