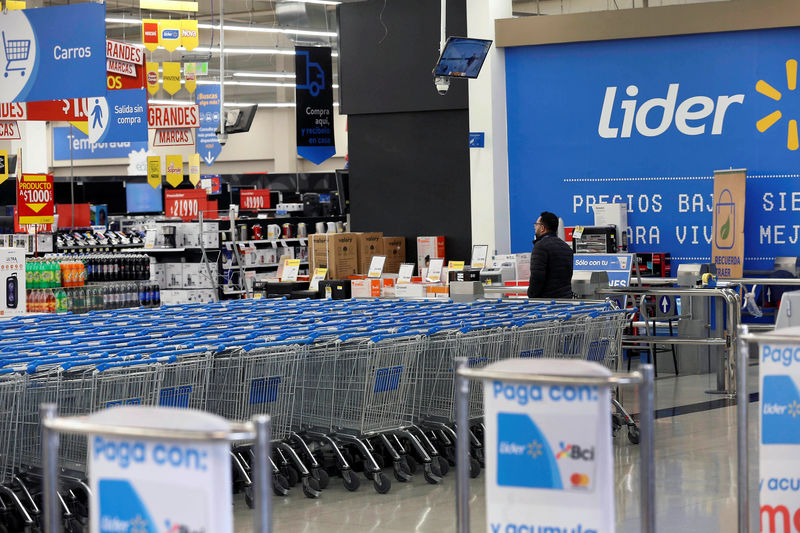 © Reuters. FILE PHOTO: The supermarket Lider of the retailer Walmart is seen in Santiago

SANTIAGO (Reuters) – Walmart has sought court orders for police protection in protest-wracked Chile after more than 120 of its supermarkets were looted or burned.

The Chilean subsidiary of the U.S.-headquartered retailer (N:) lodged orders with courts in six Chilean cities, saying the attacks on its stores had put its staff’s safety and jobs at risk, “gravely” affected its ability to operate in the country and caused it “enormous economic damage”.

“The state of Chile has failed to fulfill its duty to guarantee public order and internal public security,” it said in court documents submitted on Wednesday and made public on Monday.

It said the state had failed to protect its premises and staff with a “lack of timely reaction to evident vandalism”. The stores operate under the brandnames Lider, Express, aCuenta and Ekono in Chile.

Karla Rubilar, a representative for the Chilean government, told journalists on Monday that it had worked hard to safeguard business interests amid the unrest.

“We worked from day one not only with this company but with all companies and especially small- and medium-sized enterprises to guarantee public order and security,” she said. “We will always be available to work with whoever want us to.”

The court action – in the Chilean cities of Arica, Puerto Montt, Concepcion, Chillan, Temuco and Valdivia – comes after a month of violent riots and protests across the country that started over a hike in public transport fares and broadened to address simmering grievances over endemic inequality.

The protests have left at least 23 dead, 2,365 civilians hospitalized and as many as 14,000 arrested, according to police, prosecutors and human rights groups. The finance minister put the damage to property and public transport at $3 billion.

Walmart Chile, the local subsidiary of the world’s largest company, said in a statement it had experienced 1,200 episodes of lootings and fires at 128 of its approximately 400 stores. It said 34 supermarkets had been set on fire, and 17 of them destroyed.

The company said it had sought the protection orders to ensure its stores could continue supplying customers and will not seek reimbursement from the government for the damages.