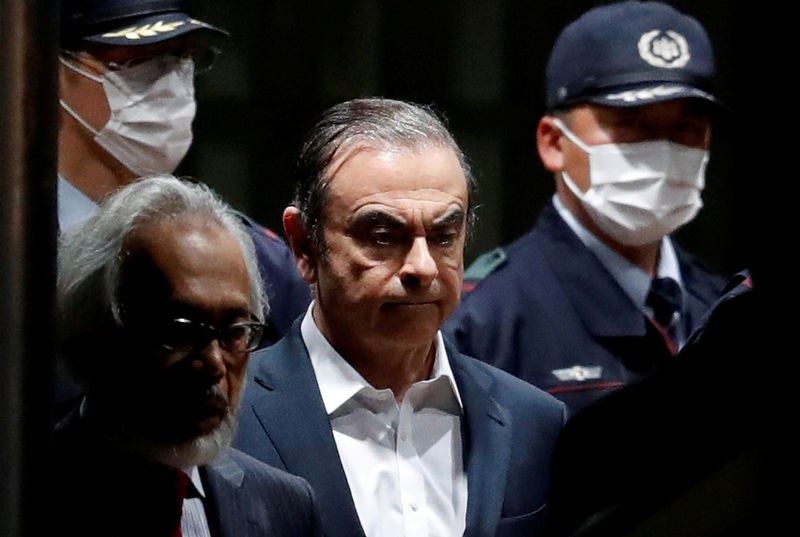 By Naomi Tajitsu and Tim Kelly

TOKYO (Reuters) – A year after his arrest, Nissan ex-Chairman Carlos Ghosn remains stuck in Tokyo under stringent bail conditions and without a trial date as he seeks access to a trove of Nissan emails and other evidence to fight charges of financial misconduct.

His lawyers have asked a court to grant access to 6,000 pieces of evidence collected from Nissan Motor Co Ltd (T:) such as electronic communications, which they say is crucial for a fair trial, showed an Oct. 4 court filing seen by Reuters.

The once-feted executive has spent 129 days in detention since his arrest shortly after his private jet touched down at a Tokyo airport on Nov. 19, 2018. He faces four charges – which he denies – including hiding income and enriching himself through payments to dealerships in the Middle East.

Nissan sacked Ghosn, saying its internal investigations revealed misconduct ranging from understating his salary while he was its chief executive, and transferring $5 million of Nissan funds to an account in which he had an interest.

An earlier court ruling allowed prosecutors to hand back evidence to Nissan during pretrial wrangling over witnesses and evidence similar to the U. S. discovery process.

If prosecutors are “given the freedom to unilaterally delete the collected evidence and return it to relevant parties, this is equivalent to granting the investigative agencies the right to destroy evidence,” showed the filing to the Tokyo District Court.

The lawyers also asked the court to rescind the earlier ruling, saying some evidence could be erased by Nissan to protect confidential business information.

They argued the “ruling deprives Mr. Ghosn of his right to receive a fair public trial by an impartial court”, as it enabled prosecutors to view and use the evidence and withhold it from the defense.

Prosecutors are not required to hand over all evidence they or the police gather during investigations unless ordered by the court, unlike in the U.S. discovery process where prosecutors and defense lawyers disclose the evidence they intend to present in court.

A spokeswoman for the Tokyo prosecutors’ office said the office could not comment on individual cases. A Nissan spokeswoman declined to comment.

Ghosn’s lawyers have also asked the court to dismiss all charges against him, accusing prosecutors of colluding with government officials and Nissan executives to oust him to block any takeover of the automaker by French alliance partner Renault SA (PA:), of which Ghosn was also chairman.

“Tokyo prosecutors have repeatedly and systematically denied Mr. Ghosn fundamental rights of due process and turned the presumption of innocence on its head,” Ghosn’s legal team said in a statement to mark the anniversary of his arrest.

As well as a defense team of four attorneys in Japan led by Junichiro Hironaka, known as the Razor, Ghosn hired nine other lawyers in Europe and the United States to help prepare for a trial they estimate may not start until April at the earliest.

In Japan, suspects who deny charges brought against them are often detained for long periods and subject to intense questioning without a lawyer present, a system some observers have criticized as “hostage justice”.

Japan’s prosecutors have repeatedly dismissed that criticism, saying Ghosn has been treated well and in accordance with the law.