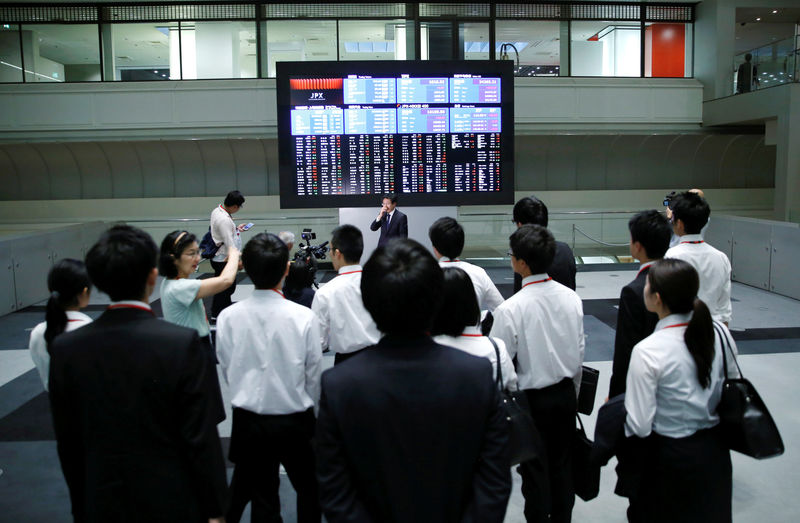 SYDNEY (Reuters) – Asian shares lumbered lower on Wednesday as the Sino-U.S. trade talks produced nothing but a stream of conflicting messages, while concerns about a glut of supply saw oil prices suffer their biggest spill in seven weeks.

Figures from the American Petroleum Institute out late Tuesday showed a far larger rise in crude stocks than expected. That followed reports Russia was unlikely to deepen its cuts to crude output.

Hopes for progress on the U.S.-China dispute had risen on Tuesday when Bloomberg reported that the previous talks that failed in May were being considered as a benchmark on what U.S. tariffs on China would be rolled back.

But later, U.S. President Donald Trump threatened to raise tariffs further if China would not agree to a deal that he liked.

Dour forecasts from retailers Home Depot (NYSE:) and Kohl’s fueled worries about consumer spending, while the energy sector () was the S&P’s biggest loser as oil slid. ()

“The immediate focus remains on the U.S.-China trade talks, and markets seem reluctant to move much in either direction until they are resolved,” wrote analysts at ANZ in a note.

“It was noticeable that fixed income markets rallied despite equity markets being stable, suggestive of a market that remains cautious about the growth outlook.”

Yields on U.S. 10-year Treasuries () dropped to a two-week trough at 1.77%, with a marked flattening of the curve hinting at a possible return of recession fears.

Investors are now awaiting minutes of the Federal Reserve’s last policy meeting where it cut interest rates and signaled a pause for the time being.

“The minutes will elaborate on the Fed’s view that the downside risks to the U.S. economy have eased, and that a “material reassessment” of the economic outlook will be needed for it to cut rates again,” said Joseph Capurso, an analyst at Commonwealth Bank of Australia.

The market has all but given up on the prospect of an easing in December, which is now priced at just 0.8%. A move in March is put at a probability of around 42%.