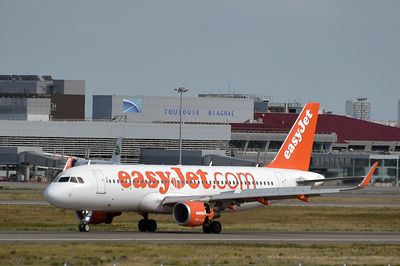 Easyjet plane ready to taking off from the Toulouse-Blagnac airport.

Budget carrier easyJet has vowed to become the first major airline to make all flights net-zero carbon, a move that may help it win passengers who want to feel less guilty about an environmentally damaging mode of travel.

The U.K. airline EZJ, +5.33%  on Tuesday reported a 26% drop in full-year profit, though shares rose 2.5% as it also said forward bookings for the year were improving.

Grabbing more headlines, including a critical response from some climate experts, was its promise to offset carbon emissions from the fuel used on each flight. Aircraft are responsible for around 2.5% of global carbon dioxide emissions, and the International Air Transport Association predicts that the CO2 emissions from airlines will hit 927 million tons this year.

“EasyJet will compensate for every ton of CO2 emitted from fuel used for its flights, by ensuring there is one ton less in the atmosphere—whether by reducing CO2 by physically removing it from the air (e.g. by planting more trees) or by avoiding the release of additional CO2,” the company said in a press release. The cost of the new initiative is expected to be around £25 million ($32 million) for 2020. The carrier last year transported 88.5 million passengers on roughly 560,000 flights.

Chief Executive Johan Lundgren stressed that this measure will stay in place until his company can take advantage of more innovative technologies, such as electric planes. The airline claims to have reduced its carbon emissions per passenger kilometer by more than one-third since 2000.

Airlines face a greater feasibility challenge than the auto industry in a switch to electric, prompting the industry to focus as well on reducing the weight of jets and pursuing biofuels.

EasyJet is probably trying to get one step ahead of a topic that is likely to only become more important, said Russ Mould, investment director at AJ Bell, the stockbroker, in a note to clients. He said the move could pay off if the airline’s strategy is seen as “genuine and not just window-dressing.”

Increasing awareness has triggered activism such as the Swedish-born “flight shame” movement, which appears to be gathering traction. It aims to get at least some of the millions of annual fliers to take a train, not a plane.

Budget airlines such as easyJet and Ireland’s Ryanair RYA, +2.96%  have been blamed for overcrowding some of Europe’s most popular cities with tourists. Ryanair won the dubious award of becoming the first company that was not in the business of coal to join Europe’s top 10 carbon emitters in 2018, according to EU figures. “When it comes to climate, Ryanair is the new coal,” said Andrew Murphy, the aviation manager at the European Federation for Transport and Environment, an umbrella association for nongovernmental organizations, in the Guardian.

In its annual report released earlier this year, Ryanair claimed to be investing “billions of dollars” to “carry more guests but at significantly lower fuel consumption and noise emissions.” The airline said its emissions figures are down 20% over the last 10 years and it expects them to fall 15% over the next decade.

A “flight-shaming” study of 300 investors, conducted recently by analysts at Citigroup, found that many of those surveyed believe demand forecasts for airlines will be under increasing pressure, in part because the media is focusing on global emissions.

Those surveyed believe the movement against flying is a mostly European phenomenon, with the biggest impact seen in Germany, France and Sweden. Short-haul flights are most at risk, given that high-speed rail is available, especially in Europe. Activist Greta Thunberg famously skipped a flight to sail to the U.S. earlier this year to attend the U.N. climate summit.

Investors are also “questioning the legitimacy of many carbon-offsetting schemes,” said the team of Citi analysts led by Mark Manduca. Investors seem to be troubled most by the idea of planting trees to offset their carbon footprint, as easyJet is planning to do.

“As an example of the confusion and contortion amongst investors, we note that a typical tree can absorb as much as 25 kg of carbon dioxide per year, i.e. one ton of carbon dioxide through a typical lifespan of 40 years—an amount and contribution that would struggle to offset just one business-class long-haul flight,” said Citi.

The European Federation for Transport and Environment responded to easyJet’s announcement with criticism that the region’s aviation sector is heavily undertaxed, something airline bosses have pushed back at.

“Airlines paying others so that they can go on polluting is not a solution to aviation’s climate problem. Decades of airlines’ unchecked emissions growth shows governments need to step up and regulate aviation’s climate impact by ending the sector’s tax privileges and mandating clean fuels,” said the federation’s Murphy in a statement.

Activist group Greenpeace labeled the easyjet move as “greenwash,” or exploiting the consumer trend to the carrier’s benefit without taking more dramatic action to offset emissions. Changing consumer behavior with a frequent-flier tax to reduce the number of flights is the only way to get closer to zero-carbon, the environmental group said.