Home
Stocks
Encore: How far off are the actuarial adjustments of Social Security benefits?
Prev Article Next Article

The option to claim Social Security early was introduced over 60 years ago, when Congress set 62 as the program’s “Earliest Age of Eligibility.” To keep lifetime benefits constant, on average, those claiming at 62 receive 20% less in monthly benefits than if they had claimed at 65. The option to claim between 65 and 70 on an actuarially fair basis stems from the 1983 Social Security Amendments, which gradually increased the annual “delayed retirement credit” from 3% to 8%.

Much has changed since these actuarial adjustments were introduced: interest rates have declined; life expectancy has increased; and longevity improvements have been much greater for high earners than low earners.

Longer life expectancy, which reduces the impact of an additional year of early or late claiming, would call for smaller adjustments — less of a reduction for early retirement and a smaller delayed retirement credit in order to keep costs constant across claiming ages. Lower interest rates, which raise the cost of late versus early claiming, would also call for reducing the penalty for early claiming and the reward for later claiming.

To estimate the magnitude of the required adjustment requires comparing the cost of lifetime benefits for early versus late claiming. If the costs to the government are equal — that is the ratio of the two costs is 1.0 — then the adjustment is actuarially fair. Figure 1 shows that the ratio of age 62 costs to age 65 costs, which was close to 1.0 in 1960, is expected to be 0.94 in 2020. Thus, the reduction for early retirement is too large, and reducing it would bring the costs at 62 and 65 closer together. 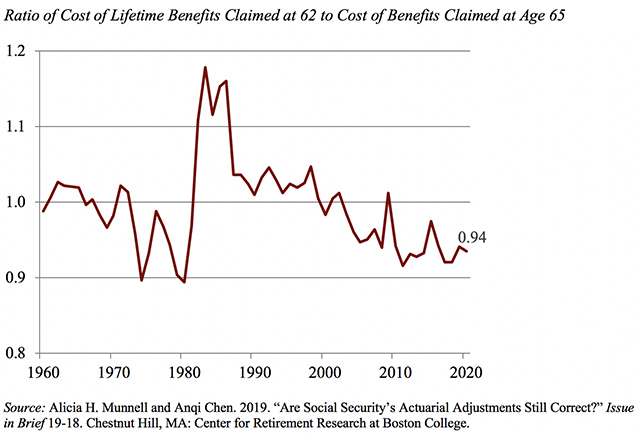 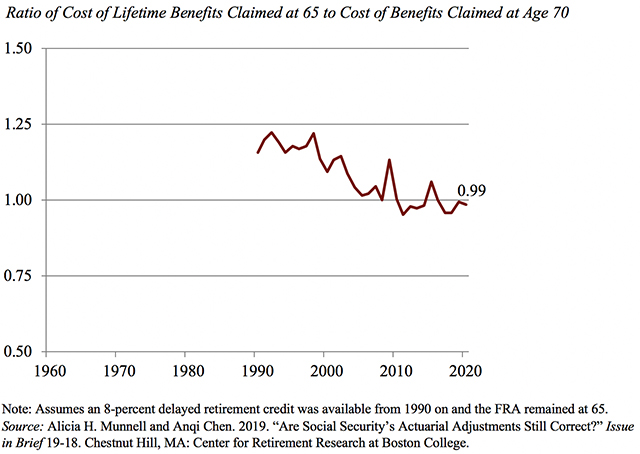 The simple results, however, substantially understate the advantages for high earners. The evaluation of the adjustments presented above was based on the life expectancy of the average worker. If the assessment had been based on the longer and increasing life expectancy of high earners, the delayed retirement credit should be smaller than the current 8% to equalize the cost of early versus late claiming.