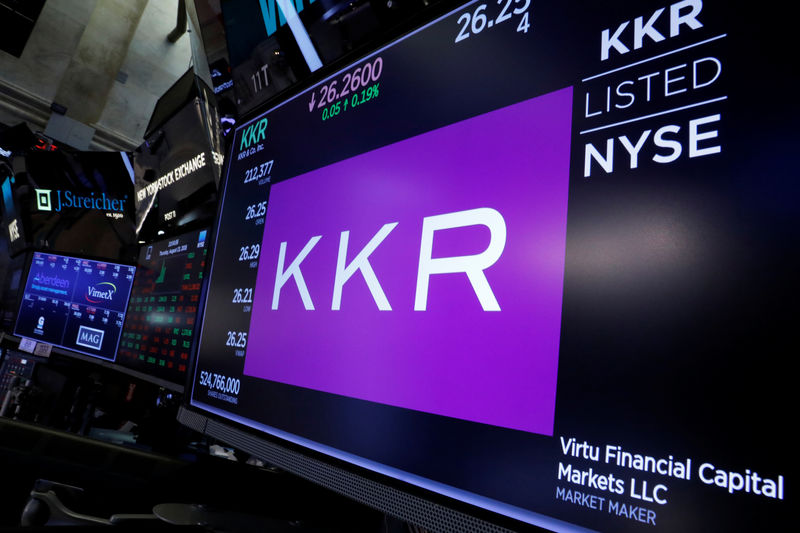 © Reuters. FILE PHOTO: Trading information for KKR & Co is displayed on a screen on the floor of the NYSE in New York

Working with advisors, private equity group (PE) KKR has reached out to more than a dozen potential buyers as it seeks bids for a deal that could give Goodpack a valuation of at least $2 billion, the sources said.

If successful, this would rank as one of the largest PE-backed sales in the past few years in Asia, excluding Japan and Australia, according to data from Refinitiv.

The names of the potential bidders have not been reported previously. The sources declined to be identified as they were not authorized to speak to the media.

KKR, EQT and Blackstone declined to comment, while there was no immediate response from CK Infrastructure, which is part of an empire founded by Hong Kong tycoon Li Ka-shing.

“There are a lot of parties looking at this high-profile auction. This is not a small and cheap deal, so people are keen to do a lot of work on this one,” said one banker familiar with the sale process.

Indicative bids are due in early December, they said.

KKR acquired Goodpack for about S$1.4 billion ($1.03 billion) in 2014 and delisted it from Singapore Exchange. Since then, Goodpack changed its senior management, expanded into new markets such as food and chemicals and opened new offices in Europe and the United States.

One source said KKR was seeking a price above $2 billion, given the rise in valuations of infrastructure assets in the past few years and Goodpack’s expansion.

Macquarie Infrastructure and Real Assets, a subsidiary of Macquarie Group (AX:), and U.S.-based Stonepeak Infrastructure Partners, that has raised billions of dollars, are among those eyeing Goodpack, the sources said.

Macquarie Group declined to comment, while there was no response from Stonepeak.

Sources said some of the interested parties have held meetings with Goodpack and KKR’s management to get a better understanding of the business.

Goodpack caters to global customers in the rubber, chemical, automotive and food-processing sectors. It has a fleet of four million steel intermediate bulk containers, with operations across 80 countries and a network of about 5,000 delivery and collection points.