We know when the 2020 Bronco won’t be launched. While there was some speculation that the wraps could come off as soon as the Los Angeles Auto Show, Ford’s F, +0.00%   announcement that it will debut an all-electric crossover SUV with Mustang styling cues has been followed up with a release that says the Bronco will bow next spring. It also released a logo that will be used with the revived icon.

That spring launch is expected to be preceded by the so-called “Baby Bronco,” a crossover SUV based on 2020 Escape mechanicals. While the new Escape has a more carlike look to its styling and looks to appeal to shoppers of the now discontinued Focus (and the canceled Focus Active), the Baby Bronco will have a much more rugged SUV-inspired shape.

Worth reading: 10 cars with the best resale value

In addition to the more macho look, the Baby Bronco will also have greater ground clearance and an all-wheel drive system more suited to light off-road work. The vehicle, which Automotive News says could be called Bronco Scout, Bronco Adventurer, Bronco Sport or Maverick, will rival the Jeep Renegade. Teaser shots reveal a boxy profile, round LED headlamps and the Ford name embossed on the front grille. It will probably be priced at a premium over the all-new 2020 Escape, which starts at about $25,000.

As part of its slow reveal of the new Bronco, Ford revealed an off-road race version of the new SUV at the Specialty Equipment Marketing Association (SEMA) show in Las Vegas. This race truck is essentially the bare body of the 2020 Bronco on a race chassis, so other than the silhouette, it doesn’t portray much of what buyers of the reincarnation of this icon can expect. 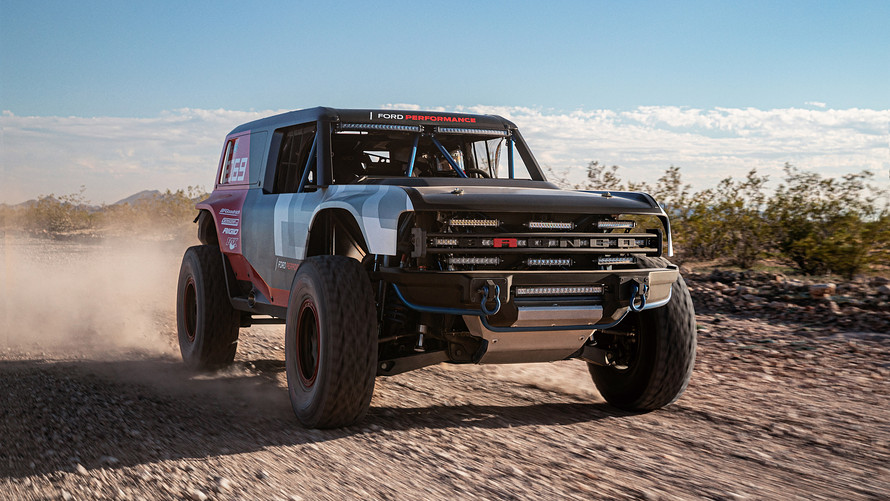 Ford admits as much by describing the Bronco R as essentially dropping heritage-inspired design and proportion hints on top of a Trophy Truck campaigned by Baja 1000 winner Cameron Steele. The teaser racer was displayed alongside a 1969 Baja-winning Bronco piloted by Rod Hall.

“Bronco’s win at Baja in 1969 was epic, something that even after 50 years has not been repeated,” said Hau Thai-Tang, Ford chief product development officer. “Rugged endurance racing is such a part of Bronco heritage. The Baja 1000 gives us not only the perfect setting to honor Rod Hall’s win, it also provides an authentic test bed to demonstrate our upcoming Bronco’s desert racing capability and durability.”

The one thing the Bronco R is — it telegraphs the size and proportions of the 2020 model versus the original. Based on the Ranger, it’s much larger than the original Bronco.

The highly anticipated 2020 Ford Bronco, when it launches next year, is taking direct aim at the Jeep Wrangler. It will have body-on-frame construction and will be built alongside the midsize Ranger at Ford’s Wayne, Mich., assembly plant. It’s expected to have a boxy, rugged SUV look to it, great off-road capability along with the requisite removable roof panels and doors, similar to its key competitor.

Where it fits in the Bronco continuum is a bit of a mystery but given the dimensions of the Ranger (which is larger than previous generation models and almost rivals some earlier F-150s in size), the Bronco will be bigger than the original, but smaller than the F-150 based on the last generation Bronco made famous by O.J. Simpson. Those looking for the feel of the first-generation compact Bronco may be surprised by the size of the new one. This also explains in part Ford’s need to round-out its portfolio with the smaller Escape-based model.

On the other hand, those who loved the full-size Bronco last produced in 1996 may find much to like about the new one, especially the fact that it will be offered both in 2- and 4-door models. There’s also speculation that Ford could do a pickup version of the Bronco somewhere in the 2024 time frame.

Read next: 14 tips for a safe and fun holiday road trip

Bronco, like Ranger, will come with a turbocharged inline-4 and there’s talk of a possible V6 option, either of which would be mated to Ford’s 10-speed automatic transmission. Hybrid powertrains are also a good bet. Standard models will be offered in rear-drive with 4-wheel drive optional on lower trims and standard higher up in the line.

How much will the 2020 Ford Bronco cost?

Since it is viewed as a direct competitor to the Wrangler, expect pricing to follow the Jeep’s pricing. The 2-door versions of the Wrangler start at just over $28,000, so we estimate that the new base 2-door Bronco should start at just under $30,000. The 4-door Wrangler starts at about $31,000 and range up over $40,000. The Gladiator pickup is priced from just over $33,000.