Home
Stocks
Key Words: Vindman says he’ll be ‘fine for telling the truth’ in impeachment probe, as Army stands ready to relocate him for safety
Prev Article Next Article 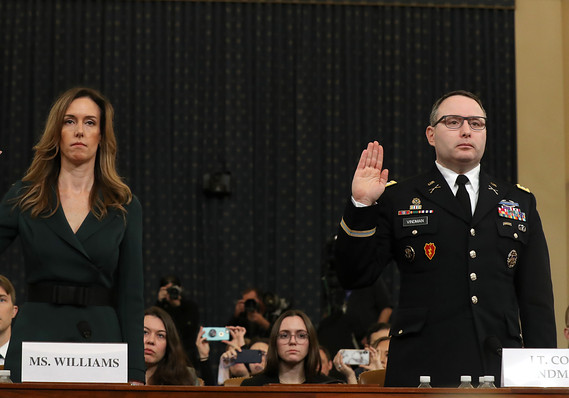 Jennifer Williams, adviser to Vice President Mike Pence for European and Russian affairs, and the National Security Council director for European affairs, Lt. Col. Alexander Vindman, are sworn in to testify before the House Intelligence Committee on Tuesday.

A key witness in the House impeachment probe on Tuesday offered starkly personal testimony to lawmakers, as it was reported the Army was prepared to move him to a military base to ensure his security:

‘Do not worry, I will be fine for telling the truth.’

Lt. Col. Alexander Vindman, a Ukraine expert at the National Security Council, was one of two witnesses to testify in the latest round of open impeachment hearings. The Army officer and Jennifer Williams, an aide to Vice President Mike Pence, were among those who heard President Donald Trump pressure Ukraine’s president to investigate Joe Biden and his son, while the U.S. placed a hold on aid to that country.

The Wall Street Journal reported Tuesday that the Army is prepared to move Vindman and his family onto a military base to ensure their security if it is determined that they are in physical danger. U.S. officials told the Journal that Army security officials in recent weeks conducted a security assessment at Vindman’s request, reviewing both his and his family’s physical security and their online security.

In his opening statement, Vindman evoked his family’s arrival 40 years ago as refugees from the former Soviet Union and said that in Russia, offering public testimony involving the president “would surely cost me my life.” He directly addressed his father in saying he would be “fine for telling the truth.”

Trump has attacked Vindman as a “Never Trumper,” but hasn’t produced evidence. Fox News host Laura Ingraham has described Vindman as “working inside the White House, apparently against the president’s interests.”

On Monday,Trump said again he had done “nothing wrong” in his dealings with Ukraine but opened the door to testifying in writing.

U.S. stocks were trading lower on Tuesday, as shares of Home Depot HD, -5.06% and Dow Inc. DOW, -2.18% were contributing to a decline in the Dow Jones Industrial Average DJIA, -0.38% . Equity markets have largely ignored the impeachment drama in Washington.

See: What to watch on Day 3 of public Trump impeachment hearings.