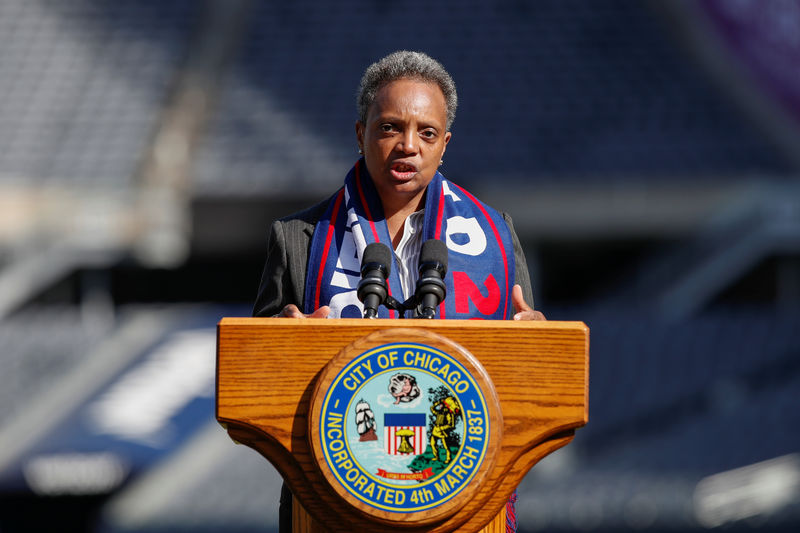 CHICAGO (Reuters) – Proposals by Chicago Mayor Lori Lightfoot to help plug a big hole in the city’s upcoming budget, including a bond refunding and a higher tax on certain ride shares, won approval on Tuesday from the city council’s finance committee.

The measures head to a final vote next week in the full city council, which will also take up the mayor’s proposed $11.65 billion all-funds, fiscal 2020 budget.

With an $838 million deficit looming, Lightfoot proposed to raise $40 million through a traffic congestion plan that would increase the tax on single-passenger rides and impose a surcharge for weekday rides to and from a designated downtown area. Ride-hailing services Uber Technologies Inc (N:) and Lyft Inc (O:) have opposed the tax, contending it would largely hurt low-income residents in Chicago’s black and Hispanic neighborhoods.

A handful of aldermen on the committee unsuccessfully tried to remove the tax from a revenue ordinance. Alderman Raymond Lopez said the city should consider a last-minute alternative offered by Uber, along with a mechanism to ensure it raises $50 million by having ride-hailing companies make up the difference.”Wouldn’t it be more beneficial for the city of Chicago to go that route?” he asked.

At an unrelated event on Tuesday, Lightfoot dismissed the alternative proposal as “another Hail Mary pass on the part of Uber.”

The biggest piece of the mayor’s budget-balancing puzzle called for refunding $1.3 billion of outstanding bonds. Originally, the city’s finance team said the move would result in a $200 million one-time savings to ease the deficit, but revised the number to $210 million.

The upward revision came after the Illinois Legislature last week failed to take up Lightfoot’s proposal for a graduated real estate transfer tax to gain $50 million from the sale of higher-priced property. City budget officials have said other belt-tightening measures would be taken to make up for the rest of the lost revenue.

The refunding of general obligation and other debt would involve an undetermined amount of new subordinate lien bonds issued by Chicago’s Sales Tax Securitization Corporation. Previous bonds issued through the corporation, which was created by former Mayor Rahm Emanuel, have earned higher credit ratings by giving investors a statutory lien on the city’s share of state sales taxes.