Home
Stocks
Market Extra: Bond investors with mall exposure face a wave of downgrades as Black Friday is about to kick off
Prev Article Next Article

It may be a “Bah! Humbug!” moment for a number of property bond investors bullish on shopping malls heading into the holidays.

A series of credit downgrades have hit bonds tied to a several struggling regional malls, even before shoppers line up for Black Friday sales next week.

Fitch Ratings cut its ratings on four junior classes of bonds tied to debt on the Holyoke Mall near Springfield, Mass., and the Sangertown Square in New Hartford, N.Y., last week and dialed down two more lower-rung classes with exposure to the Fox River Mall in Appleton, Wis., and the Eastgate Mall in Cincinnati.

The credit rating agency on Monday lowered its ratings on another eight junior classes with heavy regional mall exposure.

The decline of U.S. regional malls is nothing new, but analysts at Fitch see the potential for additional downgrades and “substantial losses” on weaker malls financed a decade ago, particularly in the face of slumping sales, high vacancies and a mound of maturing debt that may face refinancing trouble as lenders have grown more skittish about retail properties.

“We’ve been concerned with malls for the last few years,” said Mary MacNeill, who heads up U.S. CMBS surveillance for Fitch Ratings, in an interview. While 2010 and 2011 loans have benefitted from 10-year terms and low rates, MacNeill said there are no guarantees that malls grappling with shrinking sales and major department stores departures will obtain new financing, or even if some owners will want to stick by their properties.

“A savvy operator is going to pick and chose the malls they want to keep,” she said. “Many malls are owned by big operators, but if they needed to, they could hand the keys back to the lender.”

This chart shows the spike in retail loans coming due through the end of 2020. 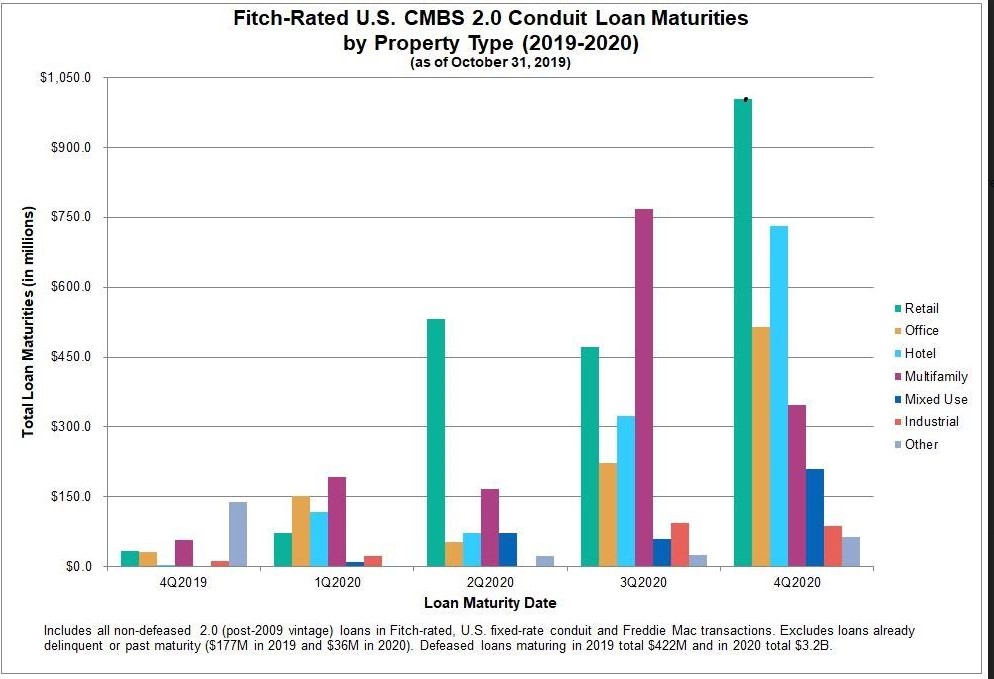 Regional malls underpin about 59% of the $2.1 billion of retail property loans coming due through next year, MacNeill said.

Mall operator CBL & Associates Properties CBL, -2.52%  already handed back the keys to its Acadiana Mall in Louisiana to lenders in the first quarter and signaled it “will probably return” others to creditors if it can’t achieve a restructuring of debt that “makes sense to us,” said chief financial officer Farzana Khaleel Mitchel on the company’s Nov. 1 third-quarter earnings call.

Shares of Macy’s Inc. M, -10.76%  were down 48% on the year-to-date Tuesday and Sears Holdings Corporation SHLDQ, -5.02% filed for bankruptcy protection a year ago.

Check out: Macy’s Needs a Miracle. But There Are Few Signs It’s Getting One

Fitch’s string of bond downgrades, so far, have impacted mostly property bonds with BBB-ratings and lower that offer investors higher yields in return for a lower repayment priority than Triple A rated securities. By lowering its ratings on those classes, Fitch has signaled that investors holding such bonds may want to brace for losses.

The years of 2011 and 2012 were banner years for shopping mall operators seeking debt in the commercial-mortgage backed securities market, but the outlook for malls since that time has darkened, particularly as an ever increasing portion of holiday shopping takes place online.

Even so, investors trying to profit from retail woes by betting that asset prices will decline and leave bondholders awash in losses, have found it a tricky business.

It also said Eric Yip, a founder of Alder, was winding down his $300 million hedge fund. He couldn’t be reached for comment.

Yip and others had been buying derivative contracts on tradable indexes, namely CMBX Series 6 and 7, which reference 25 mall-heavy commercial mortgage bond deals. Their hope has been that owners of embattled malls would default, or at least see the price of mall-saturated debt plummet.

“That doesn’t really speak to me of much distress,” said Jeffrey Williams, a senior portfolio manager at Schroders, in an interview with MarketWatch. “I think one of the things that investors and lenders learned from the financial crisis is that kicking the can down the road sometimes does work.”

To be sure, the ability of mall operators to put off losses has been good news for Boston-based mutual fund Putnam Investments, which has been conversely making big bets that downtrodden shopping-mall bonds were a smart investment.

FactSet data show that Putnam, along with a number of other Boston-based mutual-fund firms, have exposure to property bonds recently downgraded by Fitch. But it is still tough to get the timing of a loan default, or significant bond price drop, exactly right.

For one thing, investors already have been demanding hefty compensation for lower-rung portions of CMBX Series 6, meaning there may be little “surprise” left in bond prices if the pace of shopping mall loan defaults spike. “As such, even more negative fundamental outcomes may not matter for lower-rated tranches (BBB-minus or BB) to the extent expectations already incorporate expected writedowns,” wrote Bank of America Merrill Lynch analysts in a recent client note.

Lenders also have considerable flexibility in terms of working out soured debt, like extending a mall loan’s maturity, lowering its interest rate or offering a discounted pay off — so long as they show their best efforts to return as much money as possible to bondholders.

“It’s taken almost 50 years for them to die,” Williams said of the hundreds of malls that are expected to be shuttered amid the tsunami of store closures.

“It could be years before you see a material number of them close.”