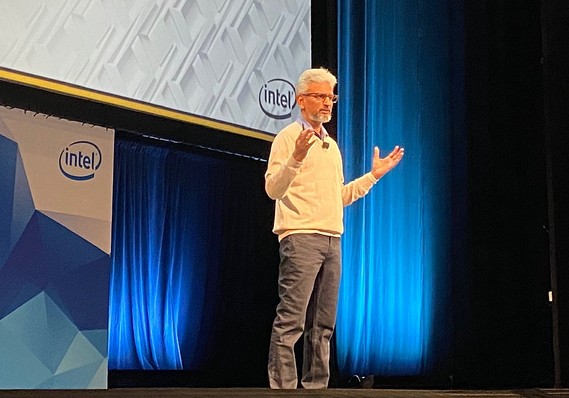 Three chip rivals — Advanced Micro Devices Inc., Intel Corp. and Nvidia Corp. — are rolling out new products in an increasingly competitive battlefield to speed up the fastest computers on earth.

Nvidia NVDA, +3.96%   pioneered the use of graphics-processing units, or GPUs, in the server market, where they are used alongside microprocessors to accelerate computing power, including artificial-intelligence workloads. AMD AMD, +3.42%  , Nvidia’s main rival for years in the GPU market, has followed with its own data-center push that also seeks to take market share from Intel INTC, +0.50%  . At the SC19 supercomputing conference this week, the three are going head to head in an attempt to show their strength in this new war.

On Sunday night, Intel began to strike, introducing a GPU designed for HPC modeling and simulation workloads and AI training, code-named Ponte Vecchio, which will be manufactured on the company’s next-generation 7-nanometer process. Intel Chief Executive Bob Swan mentioned the company’s foray into its first stand-alone GPUs on the company’s earnings conference call last month, saying the first GPU would be focused on the data center, and it would be launched next year. Ponte Vecchio will follow this chip and is expected sometime in 2021.

Intel’s new GPU for supercomputing will debut in the Aurora, a supercomputer to be built by Cray for the Argonne Leadership Computing Facility, a U.S. Department of Energy facility. It is anticipated to have a sustained performance of a quintillion calculations per second.

While Intel is the leader of microprocessors that are used in supercomputers, and has offered GPU functions within its chipsets, the stand-alone GPU arena is a relatively new field for the chip maker, one that has been dominated by Nvidia and AMD. Graphics-processing chips are increasingly important in these massive machines, because they are now becoming essential for completing hefty compute tasks. The Top 500 list of the world’s top supercomputers, released Monday, has an increasing numbers of systems with graphics-accelerator chips.

“The November 2019 list once again highlights the increasingly important role of accelerators in maintaining performance gains as core deployments continue to slow,” Wells Fargo analyst Aaron Rakers wrote in a note to clients Monday. “Despite the slowing core deployments, the industry was able to maintain performance gains through the expanding use of accelerators, which now make up 27% of all cores deployed versus 24% in November 2018.”

Nvidia and AMD did not cede the supercomputer spotlight to Intel, though. Nvidia introduced an unusual deal with Microsoft Corp.’s MSFT, +0.25%  cloud-computing business to make supercomputing capability available on Azure, calling it the largest GPU-accelerated supercomputer in the cloud. It basically lets customers rent an AI supercomputer on-demand from their desk. Nvidia also unveiled a development system for ARM processors, increasing its rivalry with Intel. ARM-based servers are still a rarity in supercomputing; Rakers said there is only one ARM-based system on the November Top 500 list.

AMD introduced some new customers in the high-performance space, including Amazon.com Inc.’s AMZN, +0.75%  Amazon Web Services, which is expanding its use of AMD’s Epyc processors, and a deal with Microsoft’s Azure. The Joliot-Curie supercomputer, made by Atos, was the first AMD Epyc installation to be included in the supercomputer global ranking.

The supercomputing arena may not be as large as the overall enterprise or data-center markets, but the trends are important. Intel is catching up to the GPU trend set first by Nvidia and then AMD. It’s an important move, and these three companies are clearly getting more competitive.