Home
Stocks
Outside the Box: This home mortgage disaster is ready to punish housing markets
Prev Article Next Article

To reiterate, in a cash-out refinance mortgage the borrower pulls out some of the equity in the house by taking out a new mortgage larger than the previous one. The homeowner pockets the difference and can use the money in any manner.

During the 2004-07 housing bubble era, homeowners in major metros used their growing equity as a piggy bank to tap at will. According to Freddie Mac’s quarterly refinance report, borrowers pulled out just under $1 trillion from their homes between 2004 and 2007. This total includes only prime first-lien conventional mortgages, and excludes subprime, other non-prime, and second mortgages.

The overwhelming majority of prime first-liens refinanced in 2006 were cash-out refis in the major metros. Take a good look at this table below, showing what percentage of refinances that year were cash-outs in the frothiest U.S. metro markets. 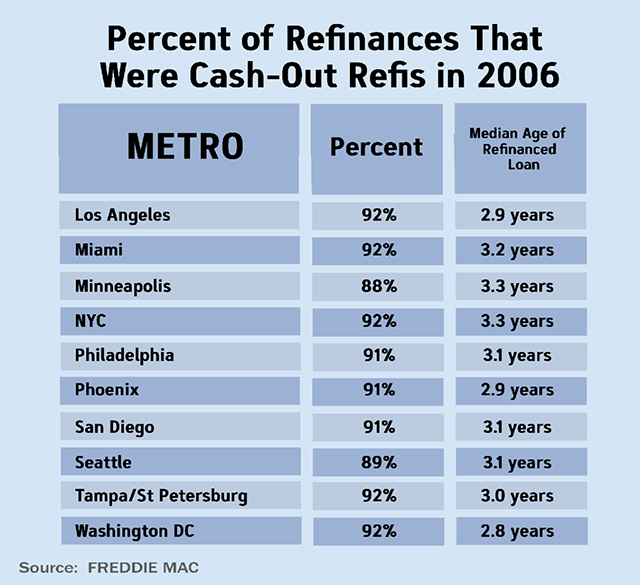 The percentage of refinanced mortgages converted into cash-outs in these 10 major metros was 90% or higher in all but two of them. Notice also that most of these borrowers had cashed out earlier loans that had been originated only a few years earlier.

How many cash-out refinance mortgages were originated during the bubble period? In April 2018, the Urban Institute published a comprehensive article entitled “What Fueled the Financial Crisis?  An Analysis of the Performance of Purchase and Refinance Loans.”

The authors had access to Fannie Mae and Freddie Mac’s entire database of full documentation, fixed rate mortgages originated between 1999 and 2016 — a total of 44.3 million loans.  The research broke down all mortgages into three different categories: (a) purchase loans, b) cash-out refis or (c) simple rate refinances. Between 1999 and 2016, a total of 11.5 million cash-out refis were either guaranteed or purchased by Fannie and Freddie. This included slightly more than 3 million cash-out refis originated between 2004 and 2007. The authors’ conclusion was that cash-out refinance loans performed worse than either of the other two.

In addition, the jumbo-mortgage cash-out refis, which were larger than Fannie Mae and Freddie Mac’s allowable limit, also should be included.  In 2005 and 2006 alone, more than 1 million jumbo refinances were originated in just the top 25 U.S. metros, for a total of roughly $650 billion.  Close to 85% of these were cash-out refis.

Cash-out refis are gaining popularity again — and are still dangerous. According to Freddie Mac’s refinance report, the percentage of refinance originations in dollars that were cash-outs soared to 23% by the end of 2018 from 3% at the close of 2012. The report notes that 82% of all refinances in the final quarter of 2018 were cash-outs refis. This chart based on Freddie Mac data shows the surge in cash-out refis over the past five years. 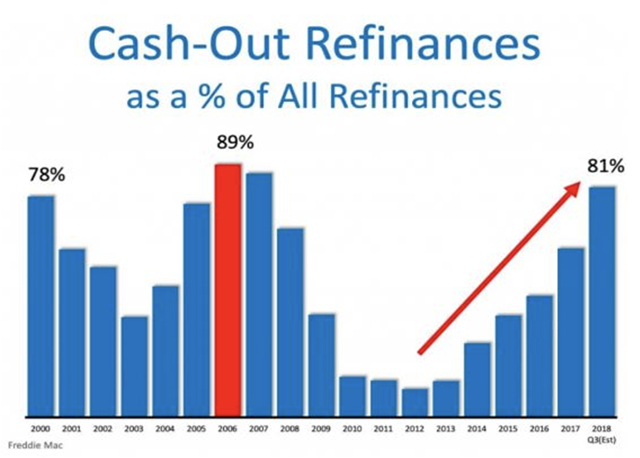 Because of the terrible experience with cash-out refis during the bubble collapse, the FHA decided to lower the loan-to-value (LTV) cap for cash-out refis to 80% from 85%. Throughout the bubble years, it had been a dangerously high 95%.

Read: Here’s the No. 1 reason why military veterans are denied a VA mortgage

In recent years, wealthy homeowners have gotten into the cash-out refi game in a big way. A CoreLogic report in January 2019 found 230 active giant refinanced mortgages between $10 million and $20 million — most originated since 2013. Almost half of these loans were identified as cash-out refis. The average amount of cash pulled out was $6.6 million.  Last year, the average had risen to $8.3 million.

The Urban Institute article breaks out Fannie- and Freddie cash-out refis that became seriously delinquent by more than 180 days. The rates for 2006 and 2007 refis are quite similar — 16% for 2006 refis and 17% for 2007.  The rates are much higher for refis where the loan-to-value ratio was greater than 90 — 29% in 2006 and 23% in 2007.  Keep in mind that these cash-out refis were high-quality loans according to traditional metrics — full documentation on the application, fixed interest rates on the loan, and an average LTV below 70. Yet that didn’t prevent droves of borrowers from defaulting.

What about more recent delinquency figures? In February 2016, investment researcher Morningstar analyzed almost 1 million investor-owned property loans originated between 2002 and 2007 that had been securitized. Close to two-thirds of these were originated between 2005 and 2007. The report found a default rate of 30% for the 2005 mortgages, 46% for the 2006 mortgages, and 47% for the 2007 liens. A substantial portion of these loans were cash-out refis.

Why bubble era cash-out refis are still a big concern

As I have described, almost 10 million cash-out refis were originated during the wildest bubble years of 2004–07. While a significant number of them have been foreclosed, most still have not.  As I noted in a previous column, mortgage servicers nationwide have been extremely reluctant to foreclose on long-term deadbeats since 2012.

Another column earlier this year laid out the enormous problem of modified mortgages that have re-defaulted one or more times. Close to two-thirds of all sub-prime bubble era mortgages had already been modified by 2015.  The re-default disaster was so great that by mid-2010 there were more subprime modified mortgages re-defaulting than there were delinquent loans being foreclosed and liquidated by mortgage servicers.

This situation still exists. The origination of new cash-out refis has been soaring for the past five years. Lenders and borrowers alike have apparently learned little from the bubble-era excesses and subsequent crash. With home prices continuing to weaken, many of these homeowners may soon find themselves underwater, or nearly so.

Read: 5 signs that home prices could be rolling over again

Plus: This widening crack in the mortgage market could sink U.S. home prices

Keith Jurow is a real estate analyst who covers the bubble-era lending debacle and its aftermath. Contact him at www.keithjurow.com.