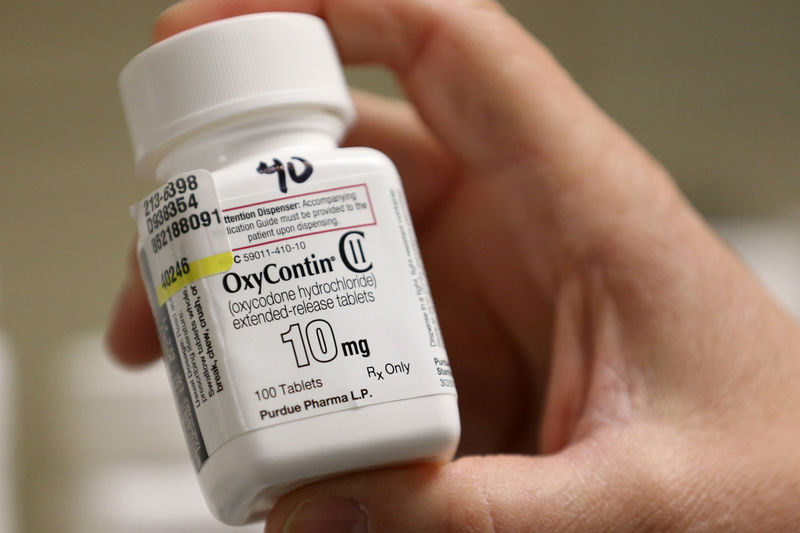 © Reuters. FILE PHOTO: A pharmacist holds a bottle OxyContin made by Purdue Pharma at a pharmacy in Provo, Utah

(Reuters) – OxyContin maker Purdue Pharma LP got court approval on Tuesday to reimburse millions of dollars in legal fees for states that back its proposed $10 billion settlement of opioid lawsuits, but with a condition meant to help victims of the addiction crisis.

Purdue had told Bankruptcy Judge Robert Drain at Tuesday’s hearing in White Plains, New York that paying the fees for seven firms that work on behalf of states and local governments would help bring structure to its Chapter 11 case and resolve it quickly.

Drain said he wanted reimbursement of the fees for four law firms, a financial adviser and two economic consultants conditioned on the parties reaching a deal on the quick release of emergency funds for victims.

Purdue proposed a $200 million emergency fund last month that could be spent quickly on addiction treatment while the parties resolve the entire bankruptcy case, a process that will take many months. Purdue has said the money has been tied up by disagreements among states, local governments and others parties over how to spend the funds.

Scott Bickford, who represents guardians of children born with neonatal abstinence syndrome caused by opioid exposure in the womb, urged Drain to reject the reimbursement request.

“It’s difficult for me to explain to my constituents why states and government authorities which have the funds to pay lawyers get their fees paid when it could be used for a hospital,” he said. “We think it sends the wrong message to victims of the opioid crisis.”

Purdue filed for bankruptcy in September in the face of thousands of lawsuits alleging it helped fuel the opioid crisis by playing down the addiction risks of its painkillers, which Purdue has denied.

The company entered bankruptcy with a framework settlement it has said is worth $10 billion, supported by about two dozen states and the local governments that filed the bulk of the lawsuits.

As governments perform due diligence on the settlement, Purdue will reimburse their reasonable fees, which could reach $20 million, a lawyer for the official committee of unsecured creditors said at Tuesday’s hearing.

Purdue still faces significant opposition led by the attorneys general from New York and Massachusetts, who have said they want the Sackler family that owns Purdue to contribute more than the proposed $3 billion.

The Sacklers also have agreed to cede control of Purdue to those who are suing it, and sell overseas businesses.