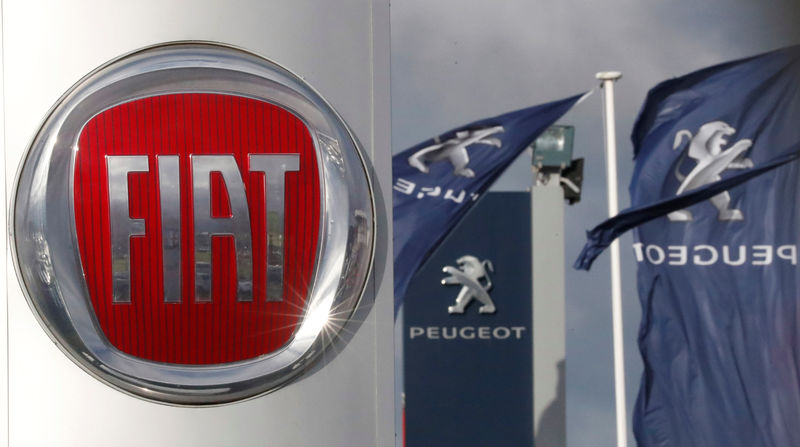 © Reuters. The logos of car manufacturers Fiat and Peugeot are seen in front of dealerships of the companies in Saint-Nazaire

However, the unions said that once the merger deal was signed, they would be seeking detailed information about the plans for the combined company.

At a PSA works council meeting, all trade union representatives on the council voted to give a favourable opinion on the merger.

“We will remain vigilant about the social impact and await a clearer and more detailed picture of the plan’s implications for plants, volume, and how much work will be given to the foundries,” said Franck Don, representative of the CFTC union.

“But the project in the form it’s been presented makes sense because the two groups complement each other, are in good financial health, and thanks to the new format will attain a critical size which is vital in the auto business today.”

The merger would help the firms pool resources to meet tough new emissions rules and investments in electric and self-driving vehicles, as well as counter a broader downturn in car markets.

Securing support from Europe’s powerful trade unions will be critical for the merged company, which will employ more than 400,000 staff and operate hundreds of factories worldwide.

The deal has stirred concerns in Germany and Britain where plants making Opel and Vauxhall cars have seen jobs cut in recent year as part of a cost-cutting drive.