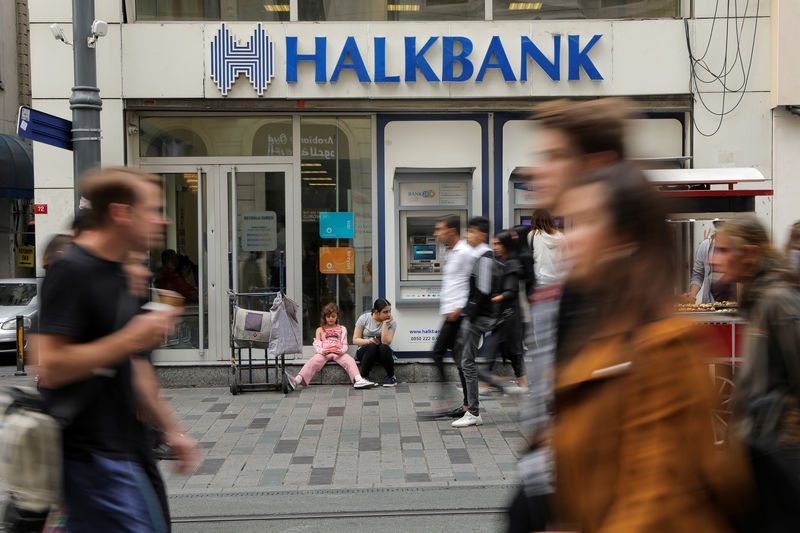 © Reuters. FILE PHOTO: People walk past by a branch of Halkbank in Istanbul

NEW YORK/LONDON/ISTANBUL (Reuters) – New moves to curb short-selling in some countries have set the stage for a renewed battle between free market advocates and authorities aiming to check investors they see as profiteers who destabilize major companies.

South Korea is considering restrictions while European authorities are investigating short-sellers over alleged market manipulation – part of a nascent trend that Carson Block, founder of U.S. short-seller Muddy Waters Capital LLC, decried to Reuters as a “global war against truth.”

Meanwhile, as Brexit looms, authorities in Frankfurt, Rome and Amsterdam could temporarily curb short-selling of companies to counter price swings triggered by the European divorce, officials have told Reuters.

The effectiveness of such bans has been questioned by some academics and institutions including the Federal Reserve Bank of New York. But the global mood may be increasingly turning against short-sellers, who borrow shares and immediately sell them, betting the price will fall before they buy back the shares and return them, pocketing the difference.

Brexit and the U.S.-China trade war are among political and macroeconomic forces that have buffeted markets, posing new conundrums for regulators. South Korean officials, for example, cited the trade conflict as a reason for their possible shorting curbs.

Such prohibitions have declined significantly since 2008-2012, when authorities moved to buttress tumbling markets during the global financial and European debt crises.

The former saw about 20 countries ban shorts of a total of more than 7,000 stocks, while the latter triggered bans of around 1,700, according to a 2018 study from the European Systemic Risk Board, which oversees the EU financial system.

“While short-selling can be a valid trading strategy, when used in combination with spreading false market rumors this is clearly abusive,” the European Securities and Markets Authority (ESMA) said in 2011 as short-selling bans swept Europe.

The EU agency said countries instituted the bans to restrict the benefits of spreading false rumors or to achieve a regulatory level playing field.

Critics of bans, however, say they undermine free markets, as well as limiting accurate asset-pricing and dampening trading volumes, raising transaction costs for all investors.

Richard Payne, a professor at London’s Cass Business School, said that research suggested “the real effect of these bans is simply to increase trading costs and reduce trading activity.”

A New York Fed review https://www.newyorkfed.org/medialibrary/media/research/current_issues/ci18-5.pdf of more than 400 U.S. financial stocks over the 14 days that short-sale bans were in effect in late 2008, for example, showed they did not have the intended effect.

Those shares had a average price decline of 12% during that period, largely in line with non-financial stocks not subject to restrictions. Meanwhile, trading costs for those stocks are estimated to have risen more than $600 million against averages, according to the 2012 report.

“Our analysis…suggests that the bans had little impact on stock prices,” it said, acknowledging that the specific causes of the price movements were unclear. “At the same time, the bans lowered market liquidity and increased trading costs.”

A 2017 analysis of short bans by ESMA also found there was no statistically significant impact on share prices or liquidity.

The EU agency, however, remains committed to select interventions. This year, it backed Germany’s two-month short sale ban on payment firm Wirecard (DE:) following a disputed media report of financial irregularities as “appropriate and proportionate to address the threat to German financial markets.”

Fabio De Masi, a left-leaning German lawmaker, told Reuters that short-selling bans could be legitimate policy tools for dealing with traders who unjustly sought profits and could trigger market panic, even if their efficacy could vary.

He generally questioned the value of short-sellers and said that hedge funds should be regulated. “Not every financial player or innovation is beneficial to our economy,” he added.

The Turkish ban initially pushed up bank stocks (), helped by a broader market gain. While trading volumes dropped to lows for the year in the following days, they have since started to creep back closer to pre-ban levels.

Financial regulators in Germany and France declined to comment for this story. Borsa Istanbul, the Turkish stock exchange and a financial supervisor, did not respond to a request for comment.

Short sale bans are not recent market phenomena; they have roots in the early 1600s, when authorities intervened to support shares of the Dutch East India Company.

Some critics, like Block of Muddy Waters, see bans and other actions against shorts as part of a broader political narrative.

“The restrictions are a way of codifying the ‘fake news’ moniker that really means ‘truthful but uncomfortable news’,” Block said.

He added that after Germany and France opened investigations into short-sellers for their bets against companies there, he hesitated to speak publicly about his short positions in both countries.

“This kind of intervention never works in the long term but never fails politically in the short term,” he added.

Khaled Abdel Majeed, founder of London-based hedge fund firm Mena Capital, said the Turkish ban was a sign of economic weakness and that he was inclined to stay out of the country.

“Any country that tries to influence the market by issuing new laws, that’s not a good sign,” he said.

Kerr Neilson, founder of $17 billion global equity investor Platinum Asset Management in Sydney, said that departures from global free-trade norms were accelerating, which could include more government action against short-sellers.

“We’re living in a world of interventions,” he said.