White House press secretary Stephanie Grisham on Tuesday claimed during a radio interview that former Obama staffers didn’t exactly roll out the welcome mat when they handed over the reins to Donald Trump’s incoming staff.

“Every office was filled with Obama books and we had notes left behind that said ‘you will fail,’ ‘you aren’t going to make it,’” she said, according to CNN.

If true, this wouldn’t be the first time there were shenanigans during such a transition. A congressional investigation found that Bill Clinton’s staff left up to $14,000 in damage behind for George W. Bush and his team. Part of that money was used to replace keyboards with missing “W” keys.

But by the looks of the response on Twitter TWTR, -0.02%, there were plenty of doubts about the validity of Grisham’s story.

“Whew — good thing for Obama that there were no smartphones or readily-accessible cameras way back in January 2017, or pictures of those notes would’ve been all over social media and TV news,” wrote “Ross of Ottawa.”

It didn’t take long for former Obama staffers to deny the allegations. Here’s Obama’s national security adviser getting fired up over it:

This is another bald faced lie. https://t.co/E1U9KtdL77

And a former senior director of the National Security Council:

This is an outrageous lie. I know. I handed over the nuclear office at the NSC. Shameless and disgusting. @PressSec should be fired. https://t.co/6sXIqMnmJY

Another senior adviser chimed in:

Produce the notes that back this up. I cannot imagine a single one of my former colleagues who would do this. From @BarackObama on down, we all tried to help facilitate a smooth and orderly transition just as President Bush and his team had done for us. https://t.co/tjY3zGdRX8

This from a CIA intelligence officer:

She’s right about one point. I left a note — tucked away in my desk — for my successor. I wished him success and encouraged him not to grow jaded despite the pace and obstacles. I also left my personal email in case he wished to seek candid advice.

I never heard from him. https://t.co/KWbzG4yLNI

One of Obama’s speechwriters had some fun with it, tweeting “It’s appalling that she thinks our notes would have been that lame.”

Joanna Rosholm, who served as Michelle Obama’s press secretary, posted an actual letter that she said she left for her successor: 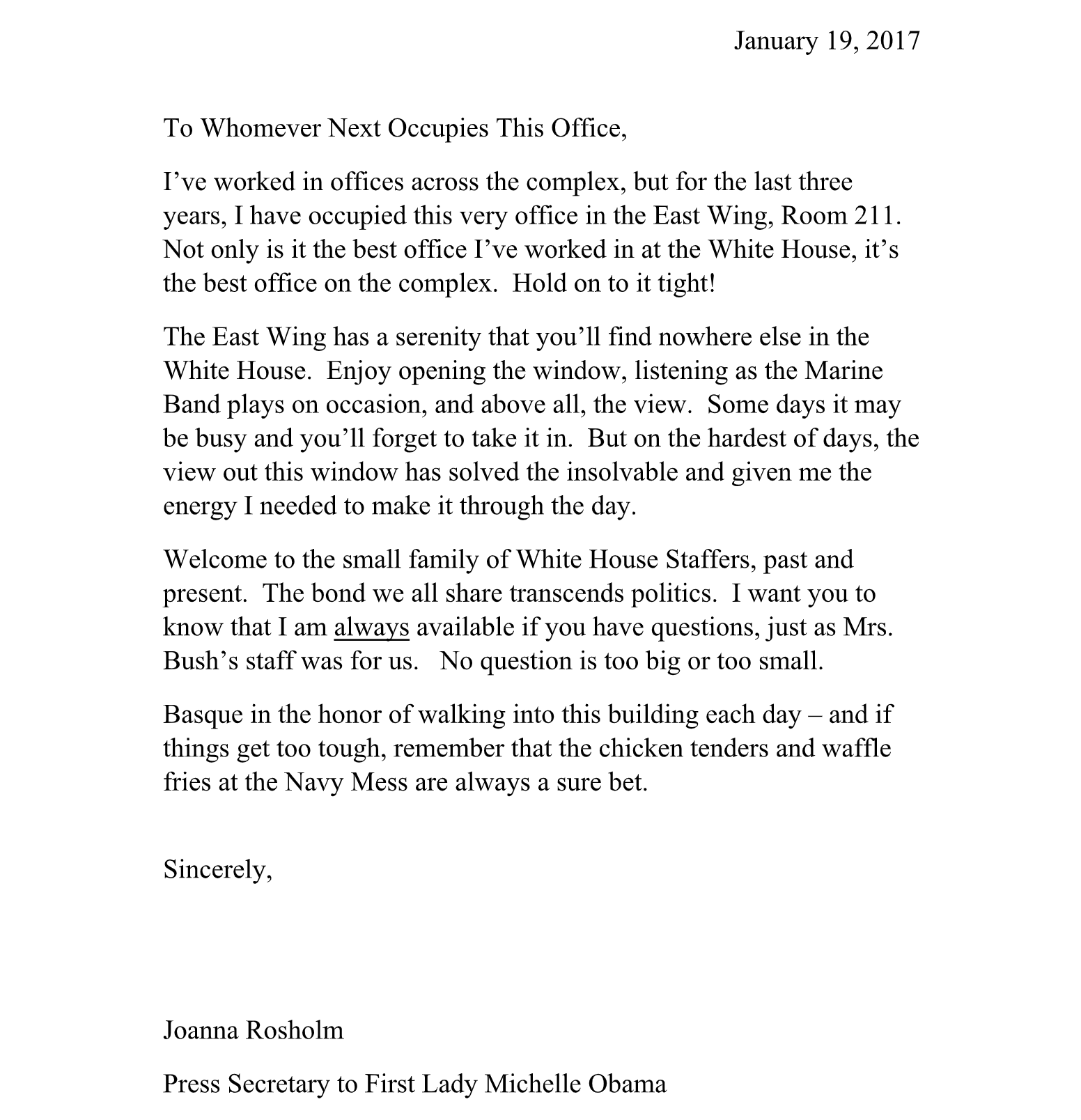 Grisham later backed down from her original accusation, clarifying to NBC News that she meant to say the notes were left only in the press area, not in every White House office as she originally claimed.

“I don’t know why everyone is so sensitive!” she said.