Home
Stocks
The Number One: This investment has beaten Warren Buffett by 200X over the past 30 years — but good luck grabbing a piece of it
Prev Article Next Article

Would you invest in a fund that charges a 5% management fee and a 44% performance fee? Sounds like an impossibly bad idea, a scam, a fleecing of the sheep by some greedy Wall Street huckster

Until you look at the numbers.

According to performance data cited by Nick Maggiulli of Ritholtz Wealth Management, the Medallion Fund, the flagship offering of Renaissance Technologies, generated a 39% average annual return from 1988 to 2018.

And that’s AFTER those massive fees.

Read: Turn yourself into a better investor by learning from hedge-fund star Jim Simons’s successes and failures

Maggiulli calls it “the greatest money-making machine of all time,” considering a $1 investment in the Medallion Fund during that period would have become $20,000, net of fees, while the S&P 500 SPX, +0.00% would have grown to $20. Not even Warren Buffett could keep pace, with $1 invested in Berkshire Hathaway BRK.A, -0.24% increasing to $100 over those 30 years.

“This means that the Medallion Fund outperformed one of the best asset classes of the last few decades by 1,000x and one of the best investors of all time by 200x!” Maggiulli wrote in a post on his Of Dollars and Data blog.

He used this chart for some added perspective: 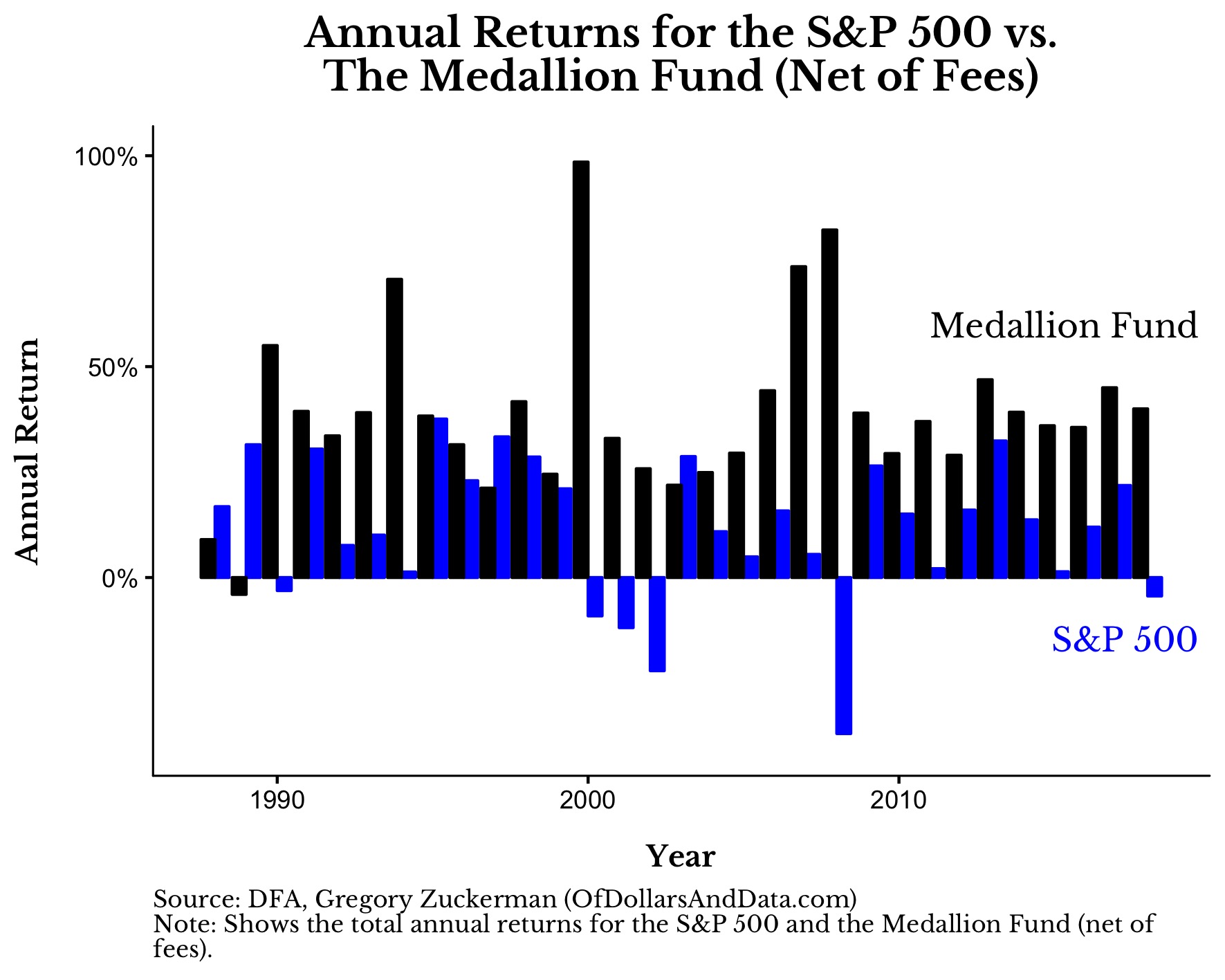 As you can see, the Medallion Fund, which is only available to Renaissance employees at this point, has crushed the benchmark S&P 500 stock index almost every year and has lost money only once, and that was back in 1989.

“When you combine its raw performance, its negative correlation with the market, and the agnosticism of its operators toward understanding actual businesses,” Maggiulli wrote, “the Medallion Fund has created a unique track record that is unlikely to be surpassed within our lifetimes.”

Renaissance founder Jim Simons, probably the most famous quantitative trader ever, retired from the firm’s day-to-day operations a decade ago, but he’s still involved and earned $1.6 billion in 2017 for his efforts.