Beaten-down commodities markets might tempt investors to start tactically adding the asset class to their portfolios in a bid for diversification. That’s understandable, but likely premature, according to one analyst.

“Is November 2019 one of these great ‘tactical’ times to add commodities to a portfolio? Our opinion is no,” said John LaForge, head of real asset strategy at Wells Fargo Investment Institute, in a Monday note.

Asset diversification is widely seen as a crucial ingredient to successful investing, LaForge noted. The gray areas in the charts below represent long-term bear markets for each major asset class, while white areas represent bull markets. The checkered pattern shows that stocks, bonds and commodities don’t necessarily move together over long periods. 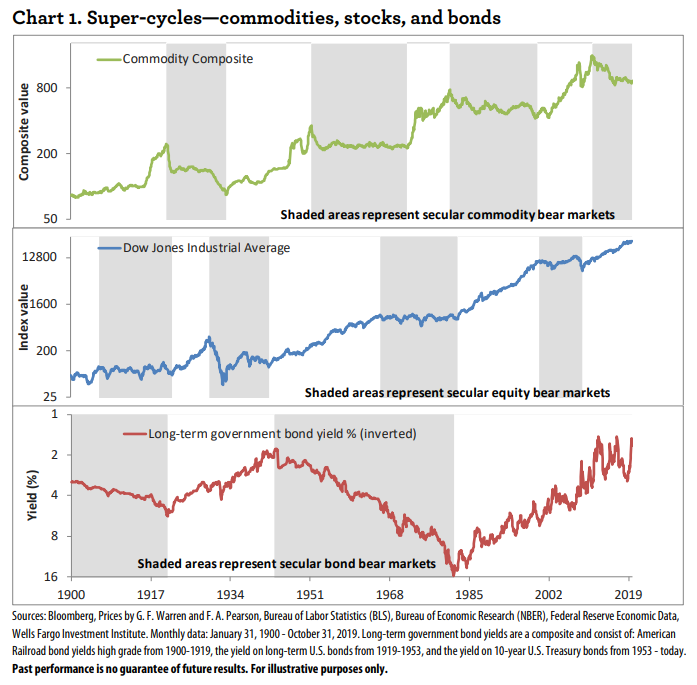 The rub, however, is that commodities are particularly tricky major asset classes to add to a portfolio, he said, particularly over a “strategic” time from of 10 years or longer.

More important, those supercycle bear markets have lasted roughly 20 years on average, which can be a substantial drag on portfolio performance. That’s a “prime reason” why the firm hasn’t made a “strategic” allocation to commodities, he said.

“Commodities have been ‘knee-deep’ inside a supercycle bear, since 2011, and we suspect they will remain that way for a few more years,” LaForge wrote.

But what about from a tactical perspective? After all, even in bearish supercycles, commodities can get beaten down too far, snapping back and offering investors a tactical opportunity. Indeed, LaForge noted that the 2014-2016 stretch, when oil prices dropped from more than $100 a barrel to under $30, dragging other major commodities along, with the price of global benchmark Brent crude BRNF20, -2.69%  subsequently recovering to average around $59 a barrel.

LaForge, however, sees only limited upside for commodities from current levels. The firm’s September 30, 2020, midpoint target for the Bloomberg Commodity Index Total Return stands at 175, up just 4% from its current level near 168.

That doesn’t offer “any great bargain once risk and other assets are factored in,” he said.