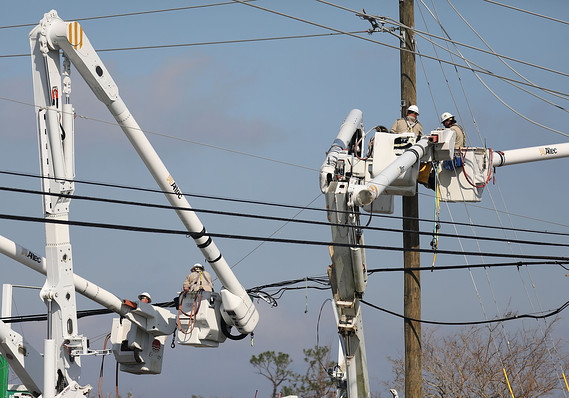 The hot new investment idea for 2020 may seem a bit… old hat.

Strategists at T. Rowe Price presented their outlook for markets and the economy Tuesday, and among the geopolitical risks and asset allocation ideas was a special report on what the company calls “the most underappreciated sector” – utilities.

T. Rowe doesn’t just think utilities are a beaten-down corner of the market due for a little love. They “offer the best risk-adjusted return opportunities of any sector over the long term,” said T. Rowe’s head of investment strategy, David Giroux. In fact, some of Giroux’ language about what’s often seen as a stodgy, safe sector sounds more suited to Silicon Valley.

That may not be a coincidence. Low-cost renewable energy is about to revolutionize the utility sector, Giroux argues.

Here’s what he predicts.

If utility companies harness cheaper, cleaner energy sources, that puts downward pressure on costs they bear. Right now, about one-third of the average electric bill goes to pay for fuel for the utility itself. That means the companies “can grow their rate base and profits at an accelerating rate without driving up customer bills,” Giroux said.

In fact, a “strong investment in renewables,” which Giroux argues is already underway, “creates a powerful flywheel where everyone is happy.” Customers get better-quality energy at a reasonable cost. Regulators and politicians get more clean energy without a hit to consumer wallets. Utilities get to see faster growth with “better regulatory relations.”

This isn’t the same utility sector that underperformed for past generations, he points out.

In the past, utilities’ earnings were often pressured by adversarial regulatory regimes, higher inflation, big-ticket expenses like new plants that often had cost overruns, and finally, what Giroux calls a “constant battle between utilities wanting to grow rate base and regulators wanting to limit customer bill impact.”

Even if the investment thesis doesn’t totally grab you, Giroux makes a strong case based on some market technicals. As the growth rate for earnings in the broader S&P 500 index has decelerated, and that of utilities has accelerated, with dividend yields adding a boost, the two are converging.

In fact, anyone thinking of positioning for a downturn with consumer staples should consider utilities instead. Investors “essentially get similar total return algorithm with no economic, foreign exchange, or secular risk,” Giroux said.

To be sure, Giroux acknowledged some concerns for utilities: a jump in inflation or interest rates, a ban on fracking, and sloppy local-level regulation.