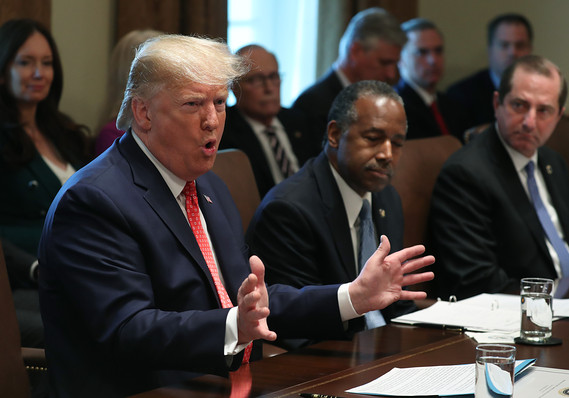 President Donald Trump speaks to the media during a Tuesday cabinet meeting.

President Donald Trump on Tuesday threatened China with higher tariffs ahead of a key deadline, and praised Republicans for their handling of the open impeachment hearings.

With investors’ doubts about a China trade deal weighing on stocks SPX, -0.01% , Trump said that “if we don’t make a deal with China, I’ll just raise the tariffs even higher.”

Trump’s remarks came during a cabinet meeting, and as the clock ticked toward a round of 15% tariffs on consumer goods from China beginning Dec. 15.

As Republicans questioned a pair of witnesses in an open impeachment hearing, Trump praised GOP lawmakers by saying they were “absolutely killing it.”

“What’s going on is a disgrace, and it’s an embarrassment to our nation,” said Trump, who denies any wrongdoing in his dealings with Ukraine.

Trump retweeted critical comments about one of the witnesses, Lt. Col. Alexander Vindman, a Ukraine expert at the National Security Council, as he testified. Trump also tweeted a video blasting the probe.

Also read: Vindman says he’ll be ‘fine for telling the truth’ in impeachment probe, as Army stands ready to relocate him for safety