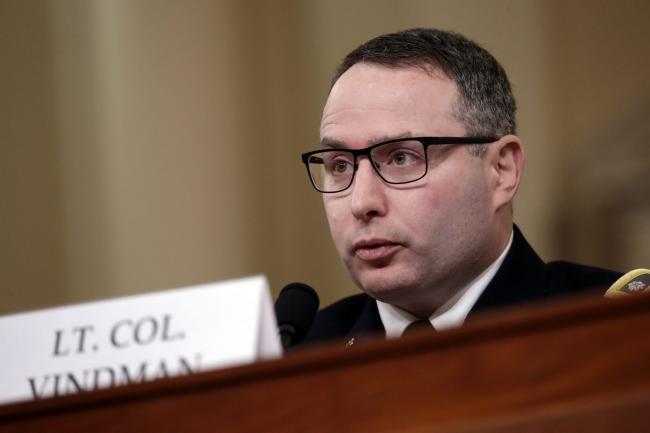 (Bloomberg) — A decorated U.S Army officer who worked at the White House and a State Department official both said President Donald Trump’s conversation with Ukraine‘s leader was an unusual and inappropriate attempt to get another nation to launch a politically motivated investigation.

Lieutenant Colonel Alexander Vindman said the July 25 call between Trump and Ukrainian President Volodymyr Zelenskiy so alarmed him that he reported it through legal channels.

“Without hesitation, I knew that I had to report this to the White House counsel,” Vindman testified Tuesday as the House Intelligence Committee began a second week of public impeachment inquiry hearings.

Vindman appeared alongside Jennifer Williams (NYSE:), a State Department employee assigned to Vice President Mike Pence’s office who also listened in on the call and viewed it as outside the bounds of typical interactions by U.S. presidents.

“I found the July 25th phone call unusual because, in contrast to other presidential calls I had observed, it involved discussion of what appeared to be a domestic political matter,” Williams said.

Three days of hearings this week will provide lawmakers and the public with testimony from witnesses with first-hand accounts of some of the events surrounding the question of whether Trump and his allies and aides tried to leverage delivery of U.S. aid and a White House visit for Zelenskiy in exchange for Ukraine opening investigations involving former Vice President Joe Biden that would the benefit the president politically.

Vindman helped prepare Trump’s talking points for the July 25 call based on issues central to U.S. policy toward Ukraine. That included cooperation on the reform agenda, anti-corruption and Zelenskiy’s efforts to end the war with Russia. Trump did not use them, which was his prerogative, Vindman said.

Trump instead made reference to a conspiracy theory about Ukrainian involvement in 2016 election interference and asked Zelenskiy to “look into” whether Biden stopped anti-corruption investigation when he was vice president and his son was on the board of a Ukrainian energy company, Burisma Holdings. Vindman said such a request would not be consistent with U.S. objectives.

“It was inappropriate, it was improper for the president to request, to demand an investigation into an political opponent,” Vindman said. “Especially a foreign power where there is at best dubious belief that this would be a completely impartial investigation.”

Because of Trump’s power over Zelenskiy, it was clear that “in order to get the White House meeting, President Zelenskiy would have to deliver these investigations,” said Vindman.

Vindman reiterated that he knows of no evidence that Ukraine interfered in the U.S. election, saying, “This is a Russian narrative.”

Vindman said he’d already alerted White House lawyer John Eisenberg to a conversation during a July 10 White House meeting when Trump’s envoy to the European Union Gordon Sondland pressed Ukrainian officials to open the politically tinged investigations being sought by Trump and Giuliani.He said he was “invited to follow up with any other concerns” and so didn’t hesitate to raise his concerns about Trump’s remarks on the July 25 call.

“It was my duty to report my concerns to the proper people in the chain of command,” Vindman testified.

The July meeting wasn’t the first time Vindman became aware of pressure being put on Ukraine. He said by March it had become clear to him that there were “non-governmental actors that were prompting the idea of investigations into 2016 Ukrainian interference” in the U.S. election.

Williams said the president’s request for a Biden investigation was “political in nature given that the former vice president is a political opponent of the president.”

Williams was not involved in the decisions surrounding the events involving Ukraine, but she was able to give a view into how they were transmitted to other government officials.

She recounted a May 13 call from a White House official informing her that Trump had decided that Pence shouldn’t attend Zelenskiy’s inauguration. She said no explanation was given.

She subsequently learned on July 3 that a hold had been placed on aid to Ukraine by the White House Office of Management and Budget. Although the State Department and the Defense Department advocated releasing the aid at subsequent meetings, OMB officials reported that acting Chief of Staff Mick Mulvaney had directed that the hold remain in place.

Vindman said he spoke with Ukrainian officials in Washington in August about the hold on the assistance, and they wanted to know what he knew about it. He said he may have said he wasn’t aware of it.

He said he was concerned that Ukraine might lose bipartisan support. The assistance is a “significant” reflection of U.S. backing for Ukrainian sovereignty. Losing it might instigate more aggressive actions by Russia, he said.

Trump and his GOP allies have tried to discredit the witnesses, describing Vindman and Williams as “Never Trumpers” and questioned the loyalty of Vindman, a decorated combat veteran. While Vindman was testifying, the White House sent a blast email charging that Vindman has faced “accusations of poor judgment, leaking, and going around normal procedures.”

Republican Representative Jim Jordan questioned Vindman about a performance evaluation cited in the White House email. Steve Castor, the Republican counsel, questioned Vindman about an offer from the then-secretary of Ukraine’s defense council, Oleksandr Danyluk, to become the country’s defense minister.Vindman defended his record and pointed to an earlier evaluations from a previous superviser with described him as “brilliant, unflappable and exercises excellent judgment.”

He said he dismissed the offer of the Ukrainian defense post – which he called “rather comical” — and reported the offer to his superiors and appropriate counterintelligence officials at the time.Democrat Representative Jim Himes ripped into Castor for the line of questioning, calling it an attempt to smear Vindman, who was born in Ukraine and came to the U.S. as a toddler.“That was designed exclusively to give the right wing media an opening to question your loyalties,” Himes said. “It’s the kind of thing you say when you’re defending the indefensible.”

In his opening statement Vindman defended his career of service and his loyalty to the U.S. He recognized his father who brought Vindman and his family from the former Soviet Union to the U.S. 40 years ago.

“Do not worry, I will be fine for telling the truth,” he said.

On Tuesday afternoon, the House Intelligence Committee, which is conducting the hearings, will hear from Kurt Volker, Trump’s former special envoy to Ukraine and Timothy Morrison, the former top Russia adviser on the National Security Council. Volker was one of three officials who were delegated to work with Trump’s lawyer, Rudy Giuliani, on Ukraine. Morrison also was on the July 25 call.

House Intelligence Chairman Adam Schiff said as the hearings got under way that Vindman has been subject to “scurrilous attacks” on his character despite his service to the country.

“Today’s witnesses, like those who testified last week, are here because they were subpoenaed to appear, not because they are for or against impeachment,” Schiff said.

Devin Nunes, the top Republican on the panel, used his opening statement to attack the media. He accused news organizations of being “puppets of the Democratic Party” pursuing another false narrative to harm the president.

Nunes spent much of his time questioning the witnesses about their knowledge about Biden and his son Hunter Biden and their activities in Ukraine. Though for the most part, Vindman and Williams had few answers because they weren’t involved in Ukraine policy at the time.

“I don’t know much about Hunter Biden” Vindman said during a round of Republican questioning about the matter.

Vindman’s identical twin brother, Yevgeny, also an Army officer assigned to the NSC, attended the hearing as a spectator. Alexander Vindman has testified that he consulted with his brother, a lawyer and ethics official, about his concerns about Trump’s call.

This week’s hearings — running over three days with nine witnesses — are crucial for both Trump and Democrats.

The House inquiry so far hasn’t caused any significant swing in public opinion about whether Trump should be impeached and removed from office, nor has it so far broken a solid wall of support for the president among GOP lawmakers. Yet the live coverage and constant drumbeat of revelations could damage the president politically as he campaigns for re-election in 2020 with already low approval ratings.