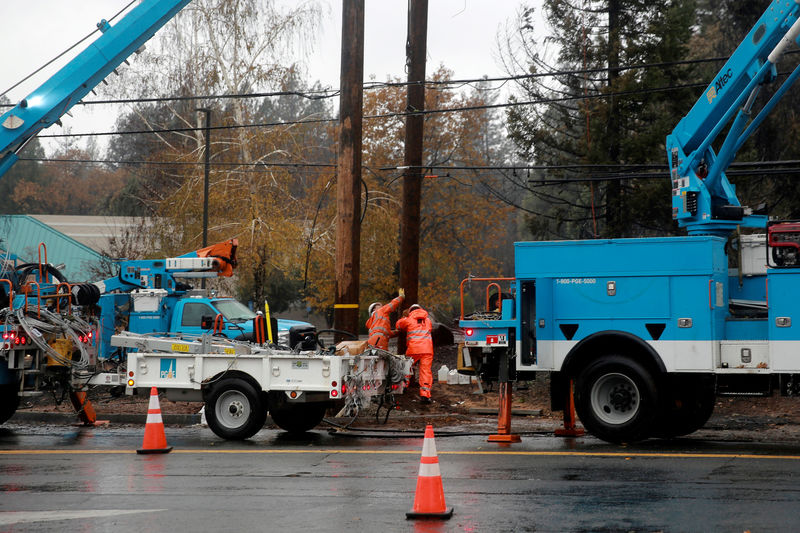 (Reuters) – About 180,000 California homes and businesses were notified on Tuesday they may lose power in the latest precautionary outage contemplated by utility giant PG&E to reduce wildfire risks posed by extremely dry, windy weather in the forecast.

If Pacific Gas & Electric Co, a unit of PG&E Corp, goes through with another “public safety power shutoff”, it would be the fourth round of mass blackouts imposed by the utility since Oct. 9, when some 730,000 customers were left in the dark.

A precautionary outage initiated on Oct. 23 hit an estimated 179,000 customers, while another conducted in phases from Oct. 26 through Nov. 1 struck a record 941,000 residences and workplaces, according to PG&E.

The outages were being considered in response to forecasts calling for humidity levels to drop and heavy desert winds to howl through the region, a scenario that significantly heightens the risk of wildfires ignited by downed power lines.

PG&E, the state’s largest investor-owned utility, filed for bankruptcy in January citing $30 billion in civil liability from several major fires sparked by its equipment in 2017 and 2018, including last year’s Camp fire, which killed 85 people in and around the northern California town of Paradise. That fire ranks as the state’s deadliest on record.

The recent wave of precautionary shutoffs have drawn sharp criticism from Governor Gavin Newsom, state regulators and consumer activists as being overly broad in scale.

Newsom blames PG&E for doing too little to properly maintain and secure its power lines against wind damage and has accused the utility of poorly managing some of the mass outages.

Utility executives have acknowledged room for improvement while defending the sprawling scope of the power cutoffs as a matter of public safety.

The California Public Utilities Commission recently opened a formal investigation into whether PG&E and other utilities violated energy regulations by cutting power to millions of residents for days at a time during periods of high winds.

Even as northern California was bracing for heightened wildfire risks, parts of Southern (NYSE:) California, including Los Angeles, were expected to be doused by their first substantial showers after months of little or no rainfall.