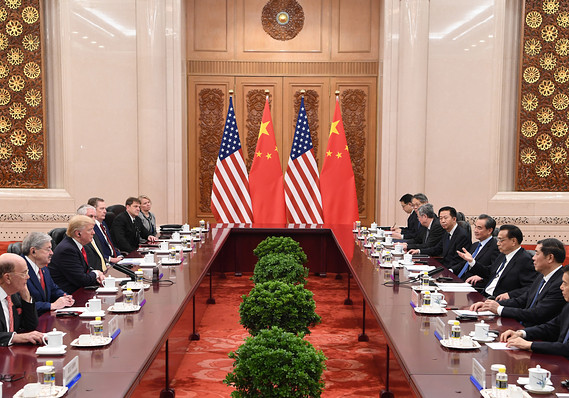 President Donald Trump in the Great Hall of the People in Beijing, capital of China. The U.S. and China are struggling to complete a “skinny” trade deal after nearly two years of wrangling.

Doubts about a so-called “skinny” deal between the U.S. and China are resurfacing on Wall Street a month after a seeming breakthrough in trade talks helped drive the stock market to fresh all-time highs.

The two nations have struggled to put the final touches on a so-called phase-one agreement they announced to much fanfare in an Oct. 11 event at the White House. The tentative deal is supposed to be the first step in a broad agreement that settles a range of hotly contest issues between the world’s two largest economies.

The phase-one portion of the deal hinges on the U.S. delaying some pending tariff increases and China agreeing to buy a certain amount of Midwest farm crops, but the two sides are struggling to even get that modest compromise to the finish line.

Chinese leaders insist that the White House rolls back previous tariffs on tens of billions of dollars in goods in what could become a major stumbling block.

Trump, for his part, wants a firmer commitment by China to buy American agricultural products. He reportedly is more open to a rollback of existing tariffs as part of a bigger agreement, but only in return for more concessions from China.

The two sides still haven’t agreed on where to meet if they actually reach a phase-one deal and they don’t actually have a firm deadline.

“Trade deals in the modern era are hard to do,” said Neil Shearing, group chief economist at Capital Economics. They cover a range of modern issues such labor, safety and environmental standards, he noted, and require new rules on how to treat services such as banking and entertainment.

In many cases, these deals take years to thrash out. The original North American Free Trade Agreement took about four years from start to finish. A replacement deal engineered by Trump still hasn’t passed in Congress two and half years after work on an updated treaty began.

The process has also dragged along in “Brexit” negotiations between the U.K. and continental Europe as Britain seeks to go its own way.

How are two nations like the U.S. and China — much further apart in geography, culture and political systems — going to resolve thornier issues over trademark rights and the forced transfer of technology? Analysts wonder.

“We remain sceptical that enough concessions will be made to make the truce last,” said Innes McFee, managing director at Oxford Economics. “Instead it appears both sides are digging themselves in for long-term hostilities.”

Trump himself has resorted to tough talk again after a month of soothing words about the benefits of phase-one deal.

“Look, China is going to have to make a deal that I like,” he said during a White House cabinet meeting on Tuesday. “If we don’t make a deal with China, I’ll just raise the tariffs even higher.”

The next round of U.S. tariffs is set to take effect Dec. 15. Wall Street is focusing on that date as a deadline of sorts for what economists are calling a “skinny” trade deal, but there’s a growing sense that talks could drag into the new year.

“Should a deal not be reached and tariffs be raised further on U.S. trade with China and Europe, we would expect the global economy to continue to slide, very possibly into recession in the quarters ahead,” Deutsche Bank argued in a new report.

The fear of further economic damage is what’s keeping negotiations alive. The two countries returned to the negotiating table in the fall after the 19-month standoff caused the U.S. and Chinese economies to slide.

The pace of economic growth in the U.S., hindered by weak exports and business investment, slipped to 1.9% in the third quarter from 3.1% in the first three months of the year.

China, for its part, posted the slowest growth in the third quarter in 27 years and it continues to lose manufacturing contracts to other nations such as Vietnam which are not burdened by high U.S. tariffs.

With the 2020 election coming up, Trump has lots of incentive to accept a partial agreement even if it’s more symbolic than substantive, analysts say. U.S. tariffs on China have hurt farmers and manufacturers in Midwestern states that helped Trump win in 2016. His administration is feeling the political heat.

Read: U.S. stock market at record but farm bankruptcies at highest since 2011

Adding to a combustible situation are fresh protests in Hong Kong and a potential U..S. reaction if China resorts to a violent crackdown. Congress this week has passed several bills aimed at backing pro-Democracy protesters.

“The president’s made it clear it’ll be very hard for us to do a deal with China if there’s any violence or if that matter is not treated properly and humanely,” Vice President Mike Pence said Tuesday.