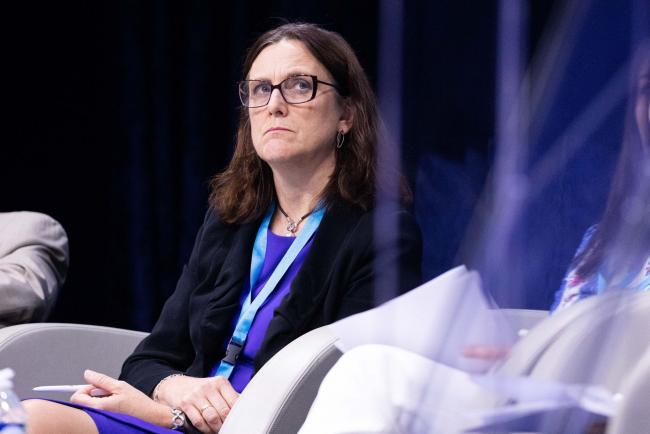 (Bloomberg) — The European Union’s chief trade negotiator said the U.S. likely won’t follow through on a threat to impose tariffs on car imports, a move that would have radically escalated trade tensions between the two economies.

EU Commissioner Cecilia Malmstrom said that because a U.S. deadline for the tariffs came and went last week without any action, President Donald Trump would abide by an agreement reached with European Commission President Jean-Claude Juncker last year that would forestall the levies.

“There were no tariffs imposed at the deadline last week. We haven’t seen any formal declaration for the decision on this, neither an informal one,” she said at a Centre for European Policy Studies conference in Brussels on Wednesday. “We assume that President Trump will stick to the agreement he made with President Juncker.”

In May, the Trump administration gave itself until mid-November to decide whether to impose levies on cars and auto parts from the EU on the basis of national security — a justification used by the U.S. to slap import taxes on foreign steel and aluminum. The EU threatened to retaliate with tariffs on $39 billion of American goods if the president carried out his threat.

Trump and Juncker reached a political agreement in July 2018 to negotiate a slash in industrial tariffs between the two regions and suspend a U.S. threat to impose tariffs on European auto exports. Scant progress has been made in discussions, with the U.S. focusing more of its attention on the trade war with China.

Last year, Trump infuriated European leaders by imposing 25% levels on steel and 10% duties on aluminum shipments from around the world, including the EU. That prompted the bloc to retaliate with tariffs on American goods such as Harley-Davidson Inc (NYSE:). motorcycles, Levi Strauss (NYSE:) & Co. jeans and bourbon whiskey.

Commerce Secretary Wilbur Ross, in an interview with Bloomberg TV earlier this month, signaled that a postponement of the tariffs was likely.

“Our hope is that the negotiations we’ve been having with individual companies about their capital investment plans will bear enough fruit that it may not be necessary to put the 232 fully into effect, may not even be necessary to put it partly in effect,” said Ross, referring to the national-security investigation under Section 232 of a 1962 trade law.