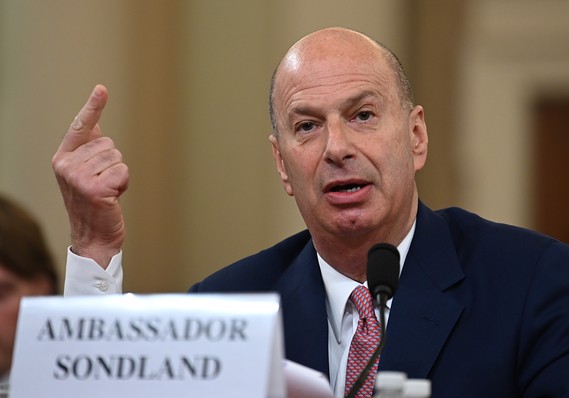 U.S. Ambassador to the European Union Gordon Sondland testifies he was following the orders of President Donald Trump in seeking a “quid pro quo” from Ukraine.

European Union Ambassador Gordon Sondland said in testimony Wednesday that there was a “quid pro quo” tying U.S. aid to Ukraine in exchange for a promise to investigate the role of political rival Joe Biden and Democrats in the 2016 presidential election, pivoting from statements he made last month.

Testifying before House impeachment investigators, Sondland said he has concluded the release of $400 million in frozen U.S. aid was conditioned upon Ukraine announcing it would conduct investigations that could be potentially beneficial to President Donald Trump’s chances of reelection.

Sondland also said Trump and other senior White House officials, including Vice President Mike Pence and Secretary of State Mike Pompeo, knew what was going on.

“Everyone was in the loop,” Sondland said. “It was no secret.”

Sondland said President Trump never mentioned former Vice President Biden to him or demanded that aid be conditioned upon the announcement of an investigation. Yet he said it became clear through his dealings with Rudy Giuliani, the president’s personal lawyer, that that’s what the president wanted.

“We all understood that these pre-requisites for the White House call and White House meeting reflected President Trump’s desires and requirements,” he added.

Back in October, Sondland told impeachment investigators that he wasn’t aware of any connection between the president’s decision this summer to hold up aid to Ukraine and his push for investigations in Ukraine against Biden and his son Hunter.

Speaking to reporters on Wednesday before heading to Austin, Texas for a meeting with Apple Inc. AAPL, -1.59% CEO Tim Cook, Trump—reading from notes referencing Sondland’s testimony—Trump repeated that he told the ambassador at the time: “I want nothing.”

“I don’t know him very well. I have not spoken to him much. This is not a man I know well. He seems like a nice guy though,” Trump said of Sondland, before departing without taking any questions from reporters Wednesday.