Home
Stocks
Mutual Funds: This chart shows how Vanguard’s explosive growth has ‘taken on a life of its own’
Prev Article Next Article

Which fund manager has the most money? It’s probably not too hard to guess. Vanguard doesn’t command as much of the retirement account marketplace as Fidelity, nor advertise as much as Schwab SCHW, +0.25%  , but it’s well-known and respected among consumers.

Still, the sheer scale of Vanguard’s footprint may not be as easy to visualize. The chart above and the smaller one below come from data in the October fund flow report from research provider Morningstar.

As Morningstar helpfully pointed out in its executive summary, “Vanguard’s 25.6% market share is greater than that of its next three biggest competitors combined.” (That’s for both mutual fund and exchange-traded funds.)

Put another way, the 10 biggest asset managers have roughly $13 trillion in assets. Vanguard holds over a third of that money. 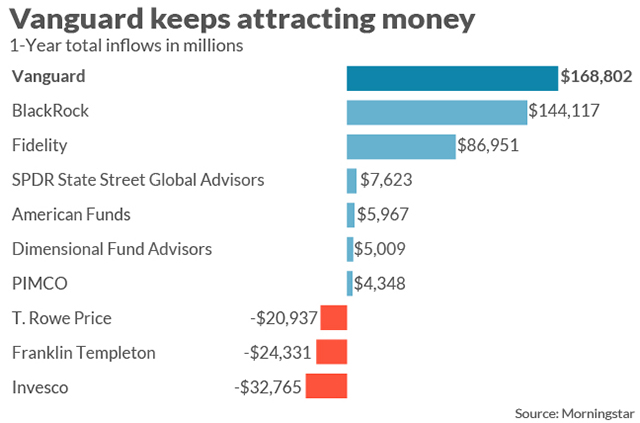 And while Vanguard didn’t see the most inflows in October — that was BlackRock BLK, -0.83%   — over the past 12 months, it has commanded far and away the biggest share: nearly half of all incoming money.

“It’s taken on a life of its own,” Morningstar’s Ben Johnson told MarketWatch. He applauds Vanguard’s decision to “systematically share the benefits of economies of scale” in the form of lower fees and, to a lesser extent, attractive product offerings.

“Decades of doing right by their end investors has been rewarded by steady and growing net new flows into the system,” Johnson said.

Not so bad for a company that, as a “fledgling upstart,” in Johnson’s words, helped bring the once revolutionary idea of passive investing to the forefront.