We’ve got your market gloom for Wednesday.

No doubt, geopolitical tensions look set to follow us right into 2020, alongside concerns about whether the global economy can hold up and as a U.S. election looms.

In our call of the day, investment management company Nuveen’s head of equities Saira Malik says investors can bolster their own portfolio defenses ahead of an uncertain year by doing this one thing—owning the right companies.

Laying out her predictions to MarketWatch, Malik believes a modest 5% gain is in store for the S&P 500 SPX, -0.06%  next year. She rattles off a list of factors she thinks could weigh on returns—the current low-interest rate environment, geopolitical ups and downs, persistent fears over the longevity of the longest bull market in history, as well as still-too-high earnings estimates for next year.

But even if the worst happens—a global recession that she doesn’t think will last that long anyway—stock picking will be key, which leads us to her three-stock survival kit: Walmart WMT, -0.30%, Merck MRK, +0.62% and Coca-Cola KO, +0.09% KO, +0.09%. These are quality companies that are less levered to how the economy will perform, says Malik.

“These are companies that are survivors and are already strong companies. Even if the stock price has a short-to-medium dip, they are going to be fine,” says Malik.

Healthcare company Merck, for example, has strong product dominance in its sector, while drinks manufacturer Coca-Cola is “moving beyond just a soda company to a total beverage company.” Retailer Walmart, unlike the behemoth Amazon AMZN, +0.01%, has a strong multichannel offer, which means it sells products through physical stores and other means.

But Walmart will cost you less, she points out. Its forward price/earnings ratio—a popular measure of valuing how much a stock is worth—is around 23 times. Compare that to 54 times for Amazon.

Driving home the trade gloom was this tweet from Hu Xijin, the influential editor in chief of China’s state-controlled Global Times.

Few Chinese believe that China and the US can reach a deal soon. Given current poor China policy of the US, people tend to believe the significance of a trade deal, if reached, will be limited. China wants a deal but is prepared for the worst-case scenario, a prolonged trade war. https://t.co/7KPp5cUOIQ

Chip stocks have had a powerful rally this year, with the VanEck Vectors Semiconductors ETF SMH, -0.34%  up more than 50%. In our chart, Advanced Micro Devices (AMD) AMD, +3.54% drives that point home after hitting a 13-year high on Tuesday. 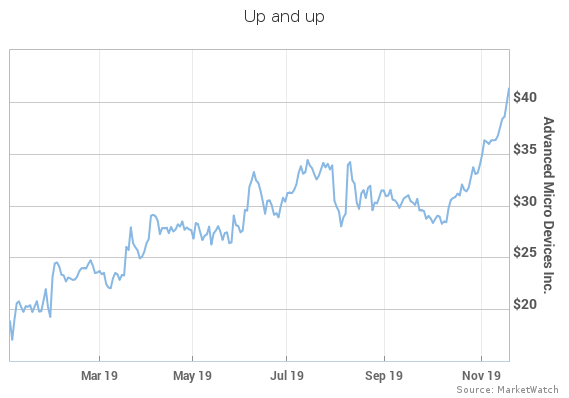 Michael Kramer, founder of Mott Capital Management, took time to warn readers that AMD is reaching “extremely overbought levels,” and a drop to $37.20 is possible.

There is not much in the way of data, except for the minutes of the October Federal Reserve meeting.

23 million — that’s the number of times the Australian bank Westpac WBK, +0.45% WBC, -3.31% allegedly breached money laundering laws, say officials in the country. “We know we have to do better,” the bank’s Chief Executive Brian Hartzer said.

The Philippines will ban vaping after its first reported case of a lung-related injury.

The best line from the U.K. General Election debate last night? “I have my own damson jam.”