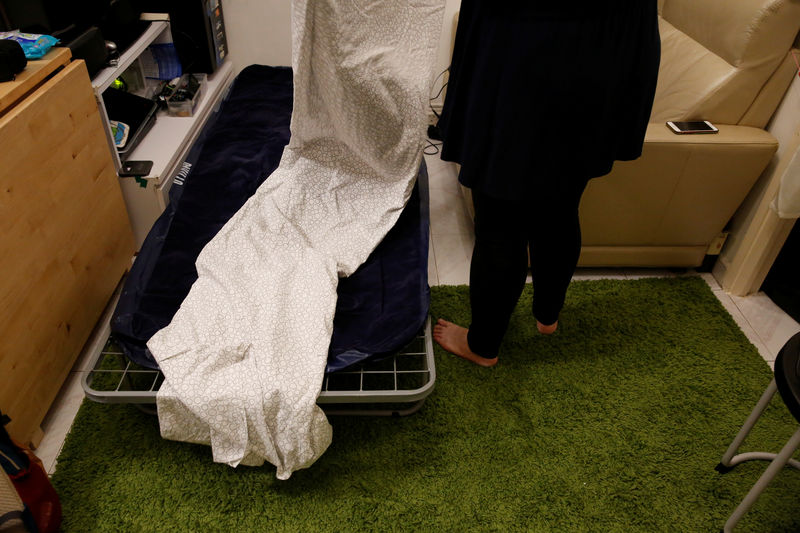 © Reuters. Katrina prepares a bed for anti-government protesters at her apartment in Hong Kong

HONG KONG (Reuters) – Mak’s children ran to her when they awoke to find a young man sleeping on an inflatable mattress in the middle of their toy room surrounded by a miniature play kitchen, blocks, trains, cars and drums.

The legal professional had invited the man, a 21-year-old protester, to stay after he quit his job to devote more time to anti-government demonstrations in Hong Kong and then didn’t have enough money to pay rent.

“There are people living in the same city who are in need and we can offer,” Mak told her 6-year-old daughter and 3-year-old son when they first asked about the stranger living in their home.

“I’d been thinking about what I can contribute,” said Mak, who asked to be identified by her surname. “I was aware of youngsters in the movement not having enough money or shelter or a place to take a rest. This is the minimum we can do.”

Mak is one of thousands of Hong Kongers who support activists away from the front lines. They might be scared to participate themselves in largely unsanctioned, and increasingly violent protests, but they want to do their part for the movement. The protests erupted in early June over a bill that would have allowed extraditions from Hong Kong to mainland China and that has since been scrapped.

Reuters spoke to more than a dozen of them, all of whom wished to remain anonymous or share only snippets of personal details, wary of scrutiny by police who have arrested more than 5,000 protesters in more than five months of unrest.

In this distinctly Hong Kong take on the sharing economy, one driven by altruism rather than profit, the support they offer ranges from shelter to car rides after rallies that often block roads and force railway stations to close – acting, in the process, as free twists on Airbnb and Uber (NYSE:).

Their stories reveal the breadth of support for the movement, the toll the protests have taken on families and the community spirit kindled in the chaos.

In a city with some of the most expensive property per square foot in the world, many Hong Kongers, like Katrina, live in tiny, crowded apartments.

But the 34-year-old church worker, who shares a dining-cum-kitchen-cum-living room, a bedroom and a small office with her husband and tabby cat, has opened her doors to seven protesters since July.

“It’s not a great environment, but if they really need shelter, it’s better than out on the streets,” said Katrina, holding out a blue sheet she uses to partition her living room when multiple protesters stay. To make more room, she threw out six dining chairs and on one particularly fraught night played host to four demonstrators, she said.

Katrina and Mak are among nearly 90 people offering their homes to young protesters on one Facebook (NASDAQ:) group, and there are at least two dozen more groups with thousands of members on the messaging app Telegram offering legal assistance, mass-transit travel cards, food vouchers and protective gear to protesters.

There is no definitive measure of how many Hong Kongers support the protest movement, which has morphed into opposition to perceived Chinese meddling with freedoms promised to the former British colony. China denies such meddling.

But more than 80% of respondents to a telephone poll of 750 people by the Chinese University of Hong Kong last month said they supported the protesters’ demand for universal suffrage, up from 74% the previous month.

A separate October poll showed that the city’s embattled leader, Carrie Lam, had the lowest popularity rating of any post-colonial Hong Kong leader.

Lam has acknowledged widespread discontent with her government but condemned escalating violence that in recent days has seen protesters locked in battle with police at a besieged university. Scores have been injured in the latest exchanges, amid barrages of tear gas, water cannons and petrol bombs.

Katrina says she objects to violence but doesn’t ask her lodgers what they do at protests.

She said the bigger question for the government is why protesters feel they must resort to violence.

“Carrie Lam says she is a mum and she treats Hong Kong youth as her kids. But you know why children do attention-seeking actions?” she said of Lam, who had no comment on how she was characterized. “Because you ignore them.”

Just under 60% of respondents to a Chinese University of Hong Kong poll last month said violent tactics are justified when the government fails to respond to large, peaceful protests. Recent escalations – in which people have been beaten, knifed and even set on fire during protests – could affect this support but, for now, do not appear to have affected offers to help activists in online groups.

“Because they actually support the demands and they are angry about the government’s responsiveness, it is hard for the public to condemn the protesters’ violence,” said Francis Lee, a journalism professor who conducted the poll.

Sun remembers the night her mother kicked her out after learning she had been at a protest earlier that day. “I left without anything, not even my shoes,” said Sun, one of many young protesters who have left or been barred from their homes after disputes with their parents over their participation in the movement.

“I felt hopeless. I didn’t know what to do, except I knew I still needed to go to protests,” she said. Months of protest have driven deep divisions in some families, with parents warning their children against taking part in the demonstrations, fearful that they will be arrested or ruin career prospects.

Many young protesters say they now dread dinnertime, a cornerstone of family life in Hong Kong, because it usually degenerates into arguments over the demonstrations.

Stress and trauma over the turmoil have created a mental health problem that medical and welfare services are not equipped to deal with. Several suicides have been linked to the protests, and this summer Lam pointed to “fundamental deep-seated problems in Hong Kong society.”

Nam, a 45-year-old worker at a teen outreach nonprofit, is in regular contact with more than 200 young, mainly working-class protesters whose parents have locked them out of their homes, cut allowances or refused to pay school fees.

To raise awareness, Nam started sharing their stories on Facebook posts that quickly went viral. She said she has since received more than 10,000 messages from people wishing to help.

“Some of the kids think it’s all coming from me, but I say there’s a lot of people behind me. They break into tears,” Nam said. “It’s not just about the basic needs, but it’s also about the love and care from a stranger.”

Cheung, 27, works in a hostel in the Kowloon shopping district of Tsim Sha Tsui – an area repeatedly hit by protests. The owner told staff to allow protesters to stay for free or store gear such as helmets, masks and shields to avoid detection from police, Cheung said.

“I thought Hong Kongers were self-interested,” she said. “Now I can see that we’re motivated by public interest. There’s no me or you. It’s for everyone.”

Getting activists safely home from protest sites is the aim of many online chat groups that coordinate drivers from across class lines to ferry protesters in sleek luxury cars and rusty sedans alike.

One such group, which they call Uber Ambulance and isn’t connected to the company, has more than 32,000 members and uses code in its requests: Protesters are commonly referred to as students, protests as school, cars as school buses, drivers as parents and protest gear as stationery.

One post seeks “parents who can pick up students after school,” for example.

Eric, 34, a chauffeur by day who drives protesters after work, told Reuters he feared going to the front lines but wanted to help.

One evening, three teenage boys he was driving from a downtown protest to the New Territories area of Hong Kong started talking excitedly about girls, he recalled.

But the banter stopped abruptly when they received a message that some of their peers had been arrested.

“They’re evacuating from the protests, the police are at their back, but they have time to talk about girls,” Eric said. “Of course, they’re teenagers.

“Frankly, I’m very worried about the future. But the one thing that’s for sure is that I will drive at every protest.”