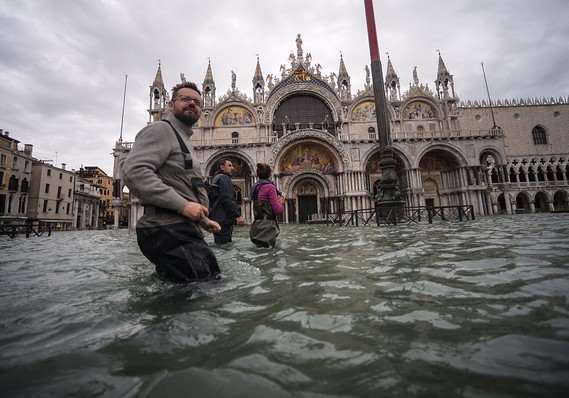 VENICE, Italy (Project Syndicate) — Some of the worst flooding in Venice’s history has submerged some of the historic city’s renowned cultural sites, including St. Mark’s Basilica on Piazza San Marco. This is only the sixth time the basilica has been flooded in 1,200 years, but the fourth time in the last two decades, and the second time in under 400 days.

At this rate, Venice’s fragile embroidery of calli, campi, and palazzi, draped over sinking sediment, could be washed away within decades. But what about the people who populate them?

Ancient Romans used two words to describe cities: urbs, which referred to the edifices and infrastructure, and civitas, for an active and engaged citizenry. Today, the world is fretting over Venice’s soaked and damaged urbs, but it has largely failed to recognize the extent to which the Venetian civitas is in decline.

Ancient Romans used two words to describe cities: urbs, which referred to the edifices and infrastructure, and civitas, or an active and engaged citizenry.

Today, the world is fretting over Venice’s soaked and damaged urbs, which is, to be sure, extremely vulnerable even to minor sea-level rises, like those brought about by climate change. But it has largely failed to recognize the extent to which the Venetian civitas is unraveling.

Venice’s population has been shrinking for decades. Today, there are just one-third as many Venetians as 50 years ago. But that decline is merely a symptom of a rapidly worsening disease: the reckless promotion of large-scale tourism and lack of investment in human capital.

Had Venice’s political leaders not begun to shift resources away from higher education and innovation in the 1980s, Venice could have emerged by now as a kind of Cambridge on the Adriatic. But tourism was viewed as a much faster route to growth.

So, with the government’s help, the number of visitors steadily climbed: in 2017, the city of 260,000 received more than 36 million foreign tourists.

As Venetians have fled the hordes, Venice’s civil society has deteriorated and political torpor has become entrenched. Municipal leaders prefer to complain about the city’s weaknesses, rather than taking effective action to address them. And Italy’s national government has consistently failed to use its authority in the city constructively.

These trends contributed to the inadequate environmental surveillance that left the urbs so exposed.

But the project, launched in 1984 — when Venice was already sinking — and inaugurated in 2003, was supposed to be completed in 2011. It remains unfinished.

Even if MOSE is finished by its current deadline in 2021, neither it nor any other construction project would be enough to protect Venice. While infrastructure investment is obviously critical — especially to adapt to climate change — Venice must look beyond the urbs to restore the civitas if is to avoid the demise that many are predicting.

The first step is to remove Venice from the jurisdiction of the Italian government, whose consistent failures have driven the city’s decline in recent decades.

This is not some parochial demand for the revival of the Republic of San Marco. It is a call for a new type of outward-looking political construct: an “open city” that welcomes anyone who genuinely wants to settle there as a full-fledged citizen, not as participants in what the American novelist Don DeLillo called tourism’s “march of stupidity.”

This new, open Serenissima (as the medieval Venetian Republic was called) would work specifically to attract a capable and engaged civitas that is prepared to help protect and rebuild the urbs. This would include innovators with credible business plans (and their financial backers), engineers researching climate-change adaptation, professionals such as doctors or lawyers, and students willing to dedicate a few years to helping restore the Venetian Lagoon’s magnificent palazzos.

Venice would thus become a testing ground for an innovative urban model based on a new social contract suited to what the sociologist Manuel Castells called a global “space of flows.”

This may seem like a radical proposal, but it is not without precedent.

In the mid-14th century, Venice’s population plummeted by 60%, owing to outbreaks of bubonic plague. The city opened itself up to foreigners, offering citizenship to anyone who planned to remain for the long term. Newcomers needed only to embrace the key characteristics of “Venetianness,” including the desire to work.

There is no reason why a similar strategy cannot work today.

In fact, thanks to digital tools, it would be easier than ever to measure civic engagement, from time spent in the city — many properties in Venice are owned by nonresidents and used only a few days per year — to concrete contributions, which could become a source of social-media pride.

A hefty tax on nonresident property owners — who are generally extremely wealthy — would also help support the local community.

As sea levels rise and Venice sinks, the city must take strong action to restore and protect its urbs. But such efforts will mean little without a prosperous and engaged civitas. To save Venice, we must first save the Venetians — above all from themselves.

Carlo Ratti teaches at the Massachusetts Institute of Technology, where he directs the Senseable City Lab, and is a co-founder of the international design office CRA-Carlo Ratti Associati. He co-chairs the World Economic Forum Global Future Council on Cities.

This article was published with permission of Project Syndicate — Reversing the Death of Venice.