Home
Stocks
The Conversation: Here’s how the fight to control the utility involved in California wildfires could play out
Prev Article Next Article 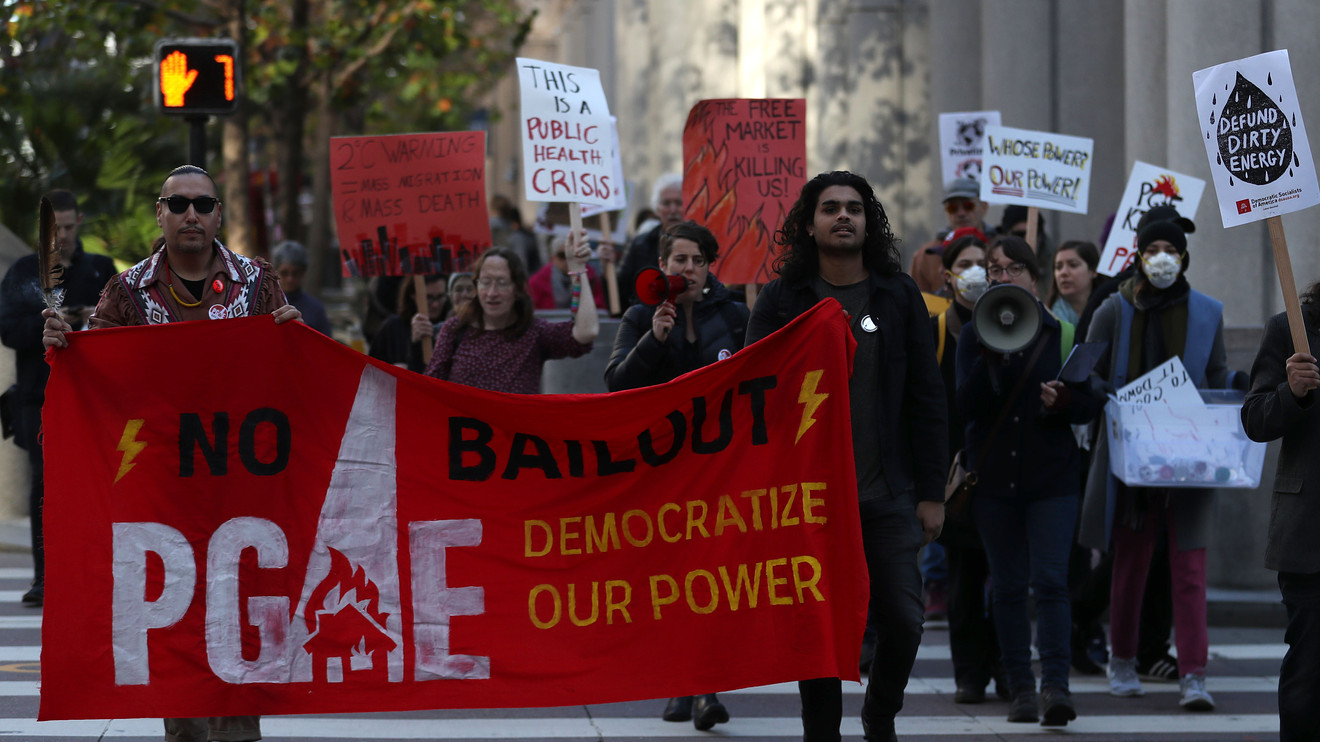 There’s a battle raging over the ownership of PG&E Corp., one of the nation’s largest utilities, with cities, hedge-fund managers and even customers all in the running.

Growing liabilities over its role in several deadly wildfires in California forced the company PCG, -0.37%   to file for bankruptcy in January. It hopes to soon reemerge with a stronger balance sheet. The state’s governor has threatened a government takeover if it doesn’t come up with a viable plan that not only keeps the company solvent but also improves safety from wildfire.

Meanwhile, a group of creditors have submitted their own plan to take control of the utility. And dozens of mayors and county leaders are behind an effort to turn PG&E into a customer-owned cooperative, driven by anger over how the company has managed the power grid — including the use of intentional blackouts in recent months to prevent wildfires. Another round of power cuts is likely to add pressure to the embattled utility.

PG&E’s troubles may be unique, but it isn’t the only U.S. utility facing challenges to a 20th-century business model that’s been buffeted by new technologies and changes in the ways that people consume electricity. Utilities in locations as diverse as Alaska, Florida, South Carolina and Texas are considering changing their ownership structure.

As the director of energy studies at the University of Florida’s Public Utility Research Center, I’ve had the opportunity to study the impacts of changes in utility ownership and what they mean for customers.

The possible paths of PG&E offer some clues.

The most likely scenario at this point is that PG&E — which serves some 16 million people from the forests of Northern California to the outskirts of Los Angeles — remains largely the same.

That’s what happened the last time the utility went through bankruptcy, in 2001, as a result of the California power crisis. It exited bankruptcy three years later following the approval of a settlement agreement with the California Public Utilities Commission in which about $7.2 billion of the costs of the bankruptcy were assigned to the utility’s customers.

So the baseline case for PG&E is that it stays pretty much the same as it was before — with the same ownership and regulatory structure — but with a cleaner balance sheet that resolves its current obligations.

This time around, part of PG&E’s plan would be to raise over $30 billion from new debt and equity and cap how much it owes victims of wildfires in agreement with the bankruptcy judge and creditors. The state regulator would then decide how much of this debt and equity to pass on to consumers.

The 2001 bankruptcy cost the average customer $1,300 to $1,600. The California legislature is considering absorbing those extra costs, which just means taxpayers would pick up the tab.

Another possibility would be the sale of PG&E to a new private investor — either to an existing utility or to a hedge fund or similar investor not currently involved in the utility business.

For example, a group of PG&E creditors led by Pacific Investment Management Co. and Elliott Management Corp. have proposed a competing restructuring plan that would wipe out existing shareholders, take the company private and set up a $12.75 billion fund for wildfire victims.

While this would change the name on the masthead, it wouldn’t change the utility’s regulatory structure at all. Responsibility for oversight regarding rate setting, capital investment and utility operation standards would still lie with the state regulator.

The potential impact on customers, however, could be significant. If a new owner were to pay more than the net book value of PG&E’s assets, that might be passed on to customers in the form of higher rates in the future. Ultimately, the state regulator would help determine the specific treatment of the so-called acquisition premium.

Others are pushing for more radical changes to PG&E.

In early September, San Francisco, for example, offered $2.5 billion to buy the company’s electricity assets in the city. Last month, PG&E rejected the offer, saying it undervalued the assets.

In California and other states, cities do have the right to take control of the assets of PG&E through eminent domain. But the process can be complex, time-consuming and costly.

For example, when Winter Park, Fla., took control of the local assets of its main power provider in 2005, the city estimated the value of the physical assets at $15.8 million. The eventual purchase price of the system determined by the arbitrator was just over $42 million. In addition, the city incurred legal and technical support costs during the process. The amount of these costs is not known, but the city issued almost $49 million in bonds to cover all of the costs of the acquisition. The process also took several years because the utility fought the city’s plan.

The upshot of this is that whether costs go up or down — which can depend — advocates for municipal takeover can at least say there’s local control.

A twist on the city taking control is forming a cooperative in which customers own the utility.

The mayor of San Jose is spearheading an effort to form a cooperative to assume control of PG&E, which, if it happens, would become the largest in the U.S. Under an electric cooperative, the utility functions as a non-profit entity and each member customer has a say in its operation. Rate-setting responsibilities lie with a board appointed by the members with any excess revenues returned to the members at the end of each year.

There’s an open question over whether customers are permitted to opt out of ownership — and simply be a paying customer without any capital obligations. Opting out, of course, would mean not having a say in the utility’s operation nor a share of excess revenues.

These proposals, which stem from deep frustration with promises for better service made following the 2001 bankruptcy and PG&E’s responses to wildfires, would represent a major change in the status quo for PG&E, which normally answers to shareholders and regulators as any other public utility would.

Yet it’s important to note that changing ownership models only affects the flow of money and responsibility, not electricity. Regardless, the utility will continue to provide service for its customers.

Any preference for one model over another depends on where people want the money to flow and where they prefer that responsibility to lie.

Ultimately, the research doesn’t suggest there’s an optimal model. Each can result in lower or higher costs depending on how the utility is run and many other factors. What really matters is what a community values most.

Also read: Was a $280 million emerald destroyed in California wildfire? PG&E is dubious

Theodore J. Kury is the director of energy studies at the University of Florida in Gainesville. This was first published on The Conversation — “What the battle over control of PG&E means for US utility customers.”