How much money can states earn in tax revenue if they legalize sports gambling? About 18 months since the Supreme Court struck down the Professional and Amateur Sports Protection Act (PASPA), we have some answers.

Since PASPA was struck down in May 2018, it’s up to each state to decide if sports betting is legal, and 13 states now allow it. Between June 2018 and August 2019, Nevada’s sports handle (the total amount wagered) was $6.6 billion and New Jersey’s was $4.6 billion. There’s a big drop-off after that, with Pennsylvania at $608 million. 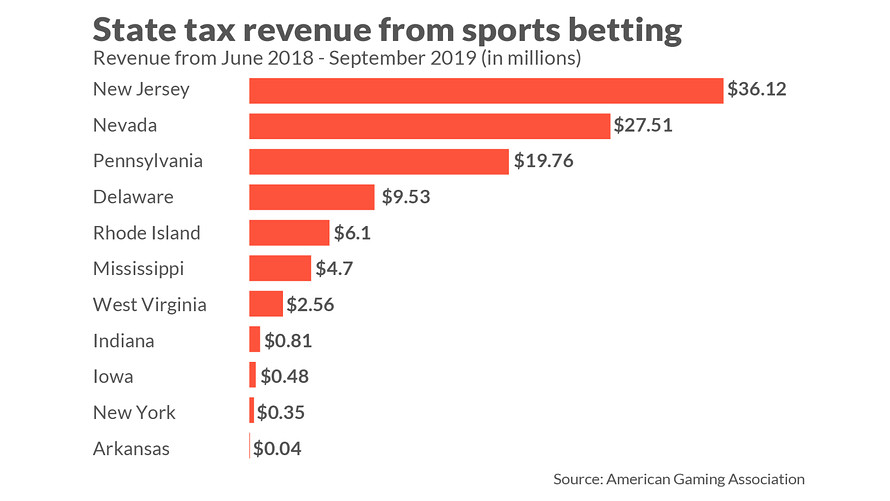 So people bet nearly $2 billion more on sports in Nevada than New Jersey during this time, but the latter took in more in tax revenue. Why? New Jersey has an 8.5% tax for sports bets made in person and a 13% tax for online and mobile sports bets. Nevada has a much lower tax rate of 6.75% for all types of sports bets.

Over 80% of all sports bets placed in New Jersey were made online, as opposed to at a retail location, meaning that a vast majority of New Jersey wagers were taxed at the 13% rate. Unlike New Jersey, Nevada does not differentiate online vs retail gambling in their public submissions.

Because of the Supreme Court’s PASPA ruling, individual states have the power to police themselves on matters like tax rates, which is why almost every state has a different tax system in regards to sports betting. Also, tribal gaming operators across all states are not subject to the same reporting standards.

New Jersey Gov. Phil Murphy has been advocating for sports betting and the tax revenue it will bring for years. “New Jersey — yes, New Jersey — can very soon and will very soon dethrone Nevada as the sports gaming capital of America,” Murphy said in June 2019 at the East Coast Gaming Conference in Atlantic City.

Even though New Jersey made over $36 million in tax revenue in the last year-plus, that’s just a drop in the bucket compared with the state’s $38.6 billion budget.