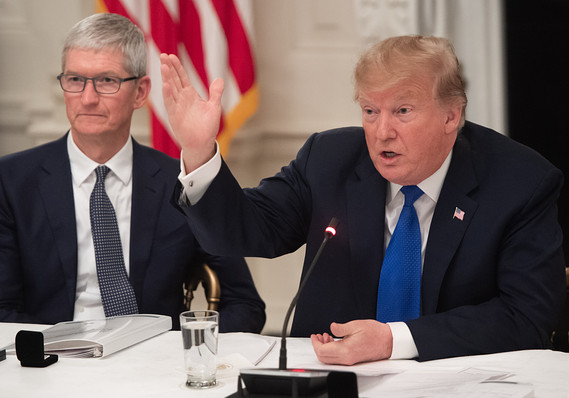 Like Bing Crosby and Bob Hope in their famous “Road” movies, President Donald Trump and Apple CEO Tim Cook make strange bedfellows. There is a close bond though between the two men that will be on display later Wednesday when Cook gives the president a tour of the new $1 billion Apple AAPL, -1.60% manufacturing plant in Austin.

Apple’s new campus will employ 5,000 people when it opens in 2022. The company has said it would make its new Mac Pro at an existing plant in August, reversing earlier plans to move production overseas. Trump will tour the facility at 2:20 p.m. Central Time.

Trump says Sondland testimony means impeachment inquiry ‘is all over’

Leaving the White House to fly to Texas, President Trump told reporters that the testimony from Gordon Sondland, the ambassador to the E.U., to the impeachment inquiry had exonerated him. “That means it’s all over,” Trump said. The president read reporters a portion of Sondland’s testimony concerning an early September call with the president. Sondland testified the president told him he wanted “nothing” from Ukraine and wanted “no quid pro quo.”

Trump said he did not know Sondland very well. “I have not spoken to him very much. Seems like a nice guy though,” he said.

Mexico and Canada are ‘ready to flee’ the new Nafta deal

President Trump warned Wednesday that Mexico and Canada are “ready to flee” the new trade pact to replace the Nafta deal. The president is impatient that the USMCA hasn’t been approved by Congress. In a tweet, the president called Speaker of the House Nancy Pelosi the “least productive” Speaker in history. Last week Pelosi said she aims to approve the new deal by the end of the year.

Nancy Pelosi will go down as the least productive Speaker of the House in history. She is dominated by AOC Plus 3 and the Radical Left. Mexico and Canada, after waiting for 6 months to be approved, are ready to flee – and who can blame them? Too bad!

Trade talks between the U.S. and China are on the verge of unraveling the Trump administration’s plan for a limited “phase-one” pact this year, according to the Wall Street Journal, citing former administration sources and others.

As he was leaving the White House, Trump said the U.S. continues to talk with China.

“China wants to make a deal, the question is do I want to make a deal, because I like what is happening right now,” he said. The tariffs in place are bringing in billions of dollars, he said.