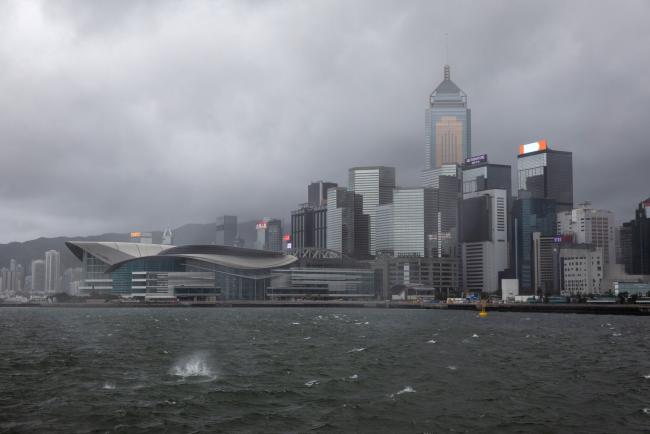 (Bloomberg) — Analysts say Hong Kong’s position as a chip in the trade war is unhelpful for sentiment in the city’s stock market, though it’s unlikely to create panic for now.

China renewed threats to retaliate after the U.S. Senate unanimously passed a bill aimed at supporting Hong Kong protesters that added to the risk-off sentiment in Asian markets Wednesday. The reaction was relatively tame in Hong Kong, where shares dropped 0.6% after surging in the past two days.

While Hong Kong stocks have seen a brief world-beating rally, sentiment has been beaten down in the last six months as protests continue to roil the city and its economy. Tourism has plummeted and Hong Kong entered a recession in the third quarter.

The move by the U.S. Senate could cause unrest in Hong Kong to escalate even more, said Raymond Chen, a portfolio manager with Keywise Capital Management (HK) Ltd. Chief Executive Carrie Lam’s government has said it may have to scrap local elections on Sunday if there is a renewed threat of violence.

The House unanimously passed a similar bill last month, yet slight differences mean both chambers still have to pass the same version before sending it to the president. President Donald Trump has not indicated if he will sign the bill.

China is likely to take offense and with that there will be negative effects for the ongoing trade war negotiations. China is already fighting fires on both fronts and the Senate’s decision is unlikely to be well-received. The market won’t receive this well either, given the uncertainty it creates.

It may affect the trade talks, so really depending on how the trade talks proceed and how Trump will leverage this, he still has the final call to veto. I’d say it’s more like a continuation of the impasse in the U.S.-China trade talks, and Hong Kong is just one of the chips.

Now, because of the bill, protests can escalate further. If things escalate further, the impact on Hong Kong’s economy will be significant, it will put pressure on capital inflows. It makes me even more cautious when it comes to markets in Hong Kong.

I believe Trump will pass it. The bipartisan pressure is too strong. Hong Kong and China individual officials will be sanctioned. It could create a split among the loyalists in Hong Kong. Other countries like the U.K. may follow. The implications will be much greater if Hong Kong’s special trading status is suspended or amended. That would undermine Hong Kong as an international financial center in the long term.

The news may cause some mild profit-taking in the short term. If the bill becomes law, we will see more downside because China will further delay the trade deal.

As far as Hong Kong is concerned, its economic situation has been badly impacted by the unrest. So the bill could bring a short-term headwind to the market.