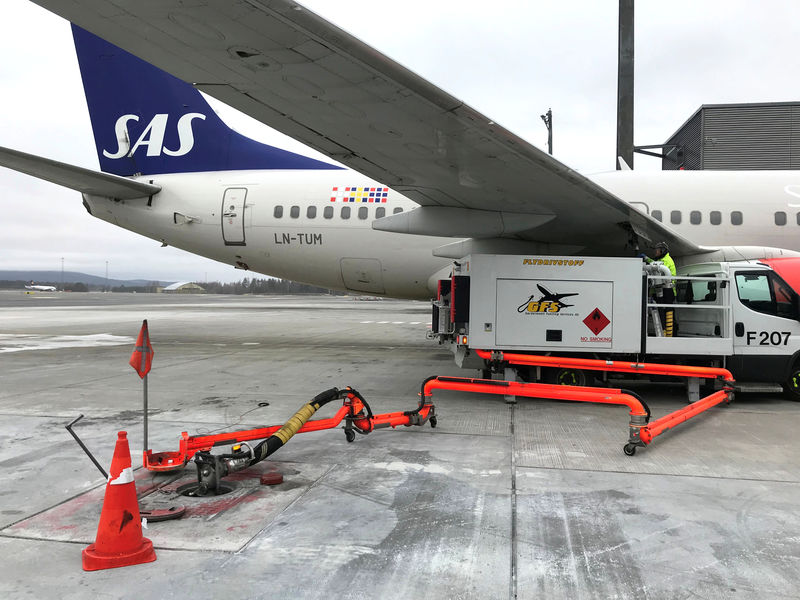 OSLO (Reuters) – Airlines are confident of having sufficient supplies of biofuel-infused jet fuel to comply with a Norway requirement which takes effect next year, although they warn of additional costs.

From January, jet fuel suppliers in Norway must blend 0.5% of biofuel in all their aviation fuel, a policy Oslo hopes will boost supply and demand and lead to lower CO2 emissions.

Although aviation biofuel suppliers say it can cut the carbon footprint of airlines by up to 80%, it costs four times as much as normal jet fuel, which has so far curtailed usage and therefore demand for increased production.

And not all biofuels are equal when it comes to their environmental impact, both in production and transportation.

Norway’s new rule demands that airplanes refueled in the country use a product made from waste fats and vegetable oil, although it excludes palm oil.

“There are not that many suppliers that supply that type of fuel. We have access and can buy these quantities at this stage. As we go into the future though we need more,” Rickard Gustafson, chief executive of SAS, told Reuters.

The Scandinavian airline has set its own goal of powering all its domestic flights, which account for 17% of its total fuel consumption, with biofuel by 2030.

It said it may source the biofuel it needs from AirBP, BP’s specialist aviation division, and intends to buy more from Sweden’s Preem, which is building new facilities.

But with Sweden and Finland considering following Norway’s lead — all three say that by 2030 they want to increase aviation biofuel use to 30% of total refueling — there is a danger that demand will outstrip production.

“We have to create the market. There is strong demand for biofuel. But not enough is produced,” Norway’s Climate and Environment Minister, Ola Elvestuen, told Reuters.

Neste and Norwegian utility Statkraft [STATKF.UL] are also developing new plants, while similar projects have been announced by Air France KLM and AirBP.

Wideroe, a small Norwegian airline, welcomes Norway’s requirement but called for other countries to follow suit.

However, budget airline Norwegian Air said Norway was creating artificial demand which, even though it can be met initially, could cause a future fuel squeeze.

“With other (biofuel) volume obligations in the future, we could easily get a supply shortage,” a spokeswoman said.

“In order to fulfil the mandate, imports from other regions might be necessary. How sustainable is biofuel that has been shipped half way around the world,” she said.

Norwegian Air has been investing in more fuel efficient planes, which should be encouraged instead, she added.

Some in the airline industry market, including the SAS CEO, said some of the extra fuel costs may be added to fares.

Despite this, passengers at Oslo airport welcomed Norway’s pioneering move.

“I do not mind if it will cost a little bit more. We have to clean up the world and do what we can do to have cleaner fuel,” said 72-year-old Dag Christopherson.