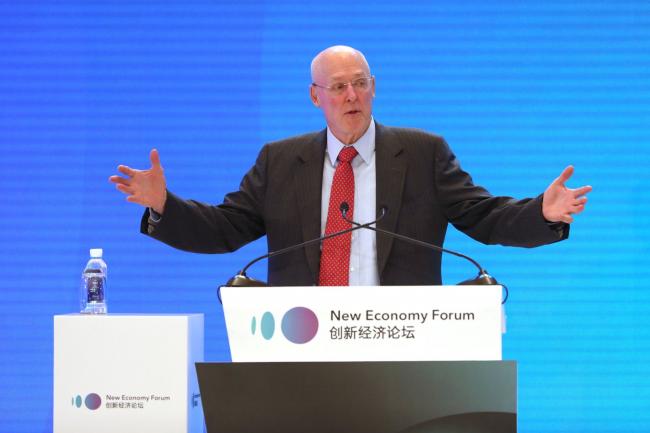 Former U.S. Treasury Secretary Hank Paulson said calls to oust Chinese companies from American stock indexes was contrary to the foundations of capitalism, as he warned against the dangers of decoupling the world’s two largest economies.

Paulson, who’s now chairman of the Paulson Institute, told Bloomberg’s New Economy Forum in Beijing that moves to reduce ties between the U.S. and China would weaken American leadership and New York’s leading role in finance. He said less cooperation between Washington and Beijing would also make it more difficult to tackle another financial crisis like the one he was forced to manage as treasury secretary in 2008.

“When the next crisis comes — and a crisis will come, because financial crises are inevitable — we will regret it if we lack mechanisms for the world’s first and second-largest economies to coordinate,” Paulson told the forum on Thursday, according to a prepared version of his remarks.

Paulson’s speech followed on from his warning at the same forum last year that an “economic iron curtain” was descending between the U.S. and Chinese economies. Since then, the relations between the two sides have grown even more strained by trade disputes, security spats and disagreement over human rights.

The U.S. Treasury said that there was no plan “at this time” to block Chinese companies from listing on U.S. stock exchanges.

“Decoupling China from U.S. markets by delisting Chinese firms from US exchanges is a terrible idea,” Paulson said. “So is forcing Chinese equities out of the MSCI indexes. It is simply contrary to the foundations of successful capitalism for politicians and bureaucrats to instruct private American players how to deploy private capital for private ends.”

The New Economy Forum is being organized by Bloomberg Media Group, a division of Bloomberg LP, the parent company of Bloomberg News.