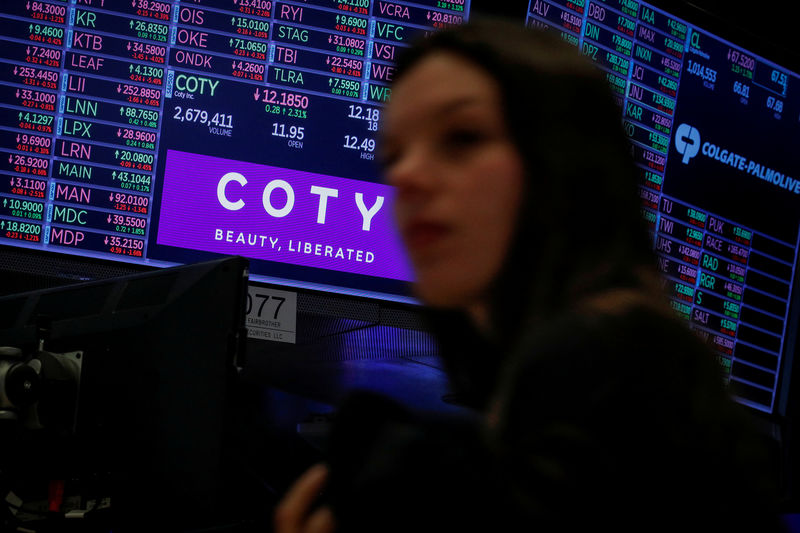 © Reuters. FILE PHOTO: A screen displays the logo and trading information for Coty Inc at the NYSE in New York

By Pamela Barbaglia and Arno Schuetze

LONDON/FRANKFURT (Reuters) – Consumer goods giants Unilever (L:) and Henkel (DE:) and a series of buyout funds including Advent and Cinven are talking to U.S. cosmetics maker Coty (N:) to submit bids for some of its most popular beauty brands, three sources told Reuters.

Coty, which has a market value of $9 billion and is majority owned by German conglomerate JAB Holdings, is expected to kick off an auction process in December to find a new owner for a portfolio of professional hair and nail care brands, the sources said, speaking on condition of anonymity.

The portfolio, which includes Wella, Clairol, GHD and OPI among others, is worth up to $7 billion and has drawn interest from both industry players and financial investors, they said.

Colgate-Palmolive Co (N:) is among a number of consumer companies looking at add-on deals to grow their skin care units, the sources said.

One of the sources said Cinven was examining a possible joint bid for the brands.

Coty, Henkel, Colgate-Palmolive, Cinven, Advent, CVC and BC Partners declined to comment, while Unilever, Blackstone and KKR were not immediately available for comment.

Coty aims to complete the sale, which was announced last month, by the middle of 2020 and has hired Credit Suisse (SIX:) to handle discussions with prospective bidders.

Confidential information packages are expected to be dispatched in December with a view to receiving non-binding offers early next year, the sources said.

Bankers advising the prospective bidders estimate the portfolio could fetch 10 to 12 times its core earnings of roughly $600 million, giving it a valuation of $6 to $7 billion, the sources said.

Coty’s professional beauty unit, which primarily sells hair and nail care products to salons, accounts for about 21% of its total revenue, with annual sales of about $1.81 billion.

The unit, however, has seen falling sales in the last four quarters, prompting Coty’s decision to reduce its exposure to the professional segment.

Coty also owns other cosmetic brands such as Rimmel and Max Factor as well as skin care firms Lancaster and Philosophy but has struggled for years to integrate such a wide range of products.

Its 2016 purchase of a slice of Procter & Gamble’s (N:) beauty business, which included Covergirl and Max Factor, forced it to take billions of dollars in write-downs and outline a four-year restructuring plan.

Its debt load stood at $7.7 billion at the end of June.

Coty’s boss Pierre Laubies said in October the sale would improve the company’s ability to invest in areas with significant growth potential, but added that proceeds from any deal would be used to pay down debt and return excess cash to shareholders.