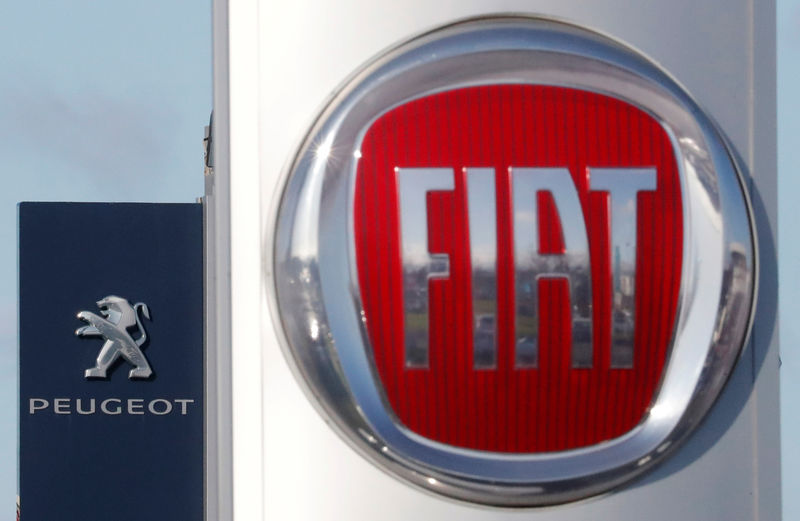 © Reuters. FILE PHOTO: The logos of car manufacturers Fiat and Peugeot are seen in front of dealerships of the companies in Saint-Nazaire

By Giulio Piovaccari and Gilles Guillaume

MILAN/PARIS (Reuters) – Fiat Chrysler’s (FCA) planned $50 billion merger with Peugeot owner PSA Group will not be blown off course by a shock lawsuit against FCA from General Motors (NYSE:), a source close to FCA said on Thursday.

The source, speaking on condition of anonymity, also said the lawsuit seeking “substantial damages” would not lead FCA and PSA to review the two companies’ valuations in their proposed deal to create the world’s fourth-biggest automaker.

“Talks are progressing smoothly,” an FCA spokesman said on Thursday. PSA declined to comment on the GM lawsuit and its potential impact on the merger talks.

FCA and PSA announced plans last month to combine forces to better tackle the cost of new technologies such as electric and self-driving vehicles as well as a downturn in auto markets.

In a letter to employees about the GM lawsuit, FCA Chief Executive Mike Manley said: “We are astonished by this filing, both its content and its timing. We can only assume it was intended to disrupt our proposed merger with PSA.”

GM on Wednesday alleged that, after it rejected a merger bid from FCA, Marchionne conspired to negotiate a new four-year contract with the UAW “designed, through the power of pattern bargaining, to cost GM billions.”

FCA will vigorously defend itself against this “meritless” lawsuit, said in the letter to staff, seen by Reuters.

“We will not be slowed down by this act,” he said, adding: “Let’s keep the performance up as it has clearly got some of our competitors worried.”

Manley was not named in the GM complaint and the source close to FCA said he was not linked to the case.