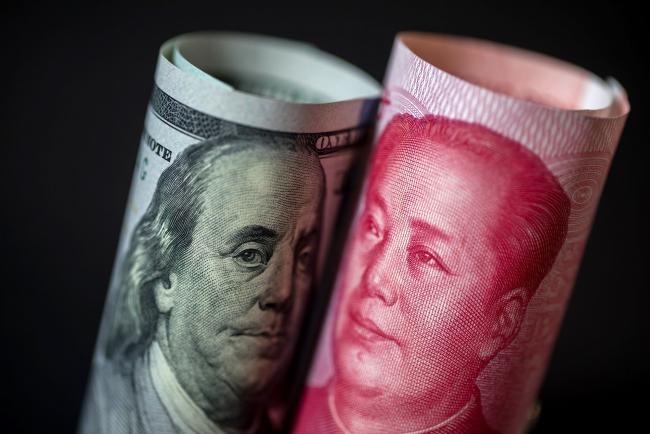 (Bloomberg) — Hong Kong stocks slumped, while the yuan weakened to a three-week low amid signs of a widening rift between the U.S. and China.

The fell 1.7% as of 10:28 a.m. local time, while China’s currency weakened 0.1%. U.S. President Donald Trump is expected to sign a bill passed by Congress supporting Hong Kong protesters, a move which could derail a potential trade agreement with Beijing. Losses pared slightly after China’s chief negotiator Liu He said he remained “cautiously optimistic” about reaching a phase one trade deal with the U.S. The MSCI Hong Kong Index lost 1.7%.

“The market has been tortured by the back and forth of the trade headlines,” said Hao Zhou, a senior emerging markets economist at Commerzbank AG (DE:). “At least one thing is clear: there remains a big gap between China and the U.S.”

A decline in the Hang Seng Index that pushed it below the 26,500 level is a turnaround from its performance on Monday and Tuesday, when it gained the most among major equity indexes. Now the risk-off sentiment is back, and the U.S. bill is throwing another wrench into Hong Kong’s fourth-quarter stock rebound. A weak yuan makes matters worse, as Hang Seng Index members get an average 64% of revenue from the mainland.

“If the bill becomes law, investors will be hesitant to take on the risk,” Hao Hong, head of research at Bocom International, said by phone. “There are too many moving parts, it’s very tricky. In the coming six months, the Hang Seng Index will be stuck in a range of 25,000 – 27,500.”

Donald Trump has been largely silent on the Hong Kong protests as they escalated into violence in recent weeks, even as lawmakers of both parties demanded action. Chinese officials quickly responded to the bill’s Senate passage Tuesday, saying Beijing “firmly” opposes the congressional action and calling it a grave violation of international law.

Trading volume in Hang Seng Index was around 50% higher than its 30-day average, data compiled by Bloomberg show. Property stocks bore the brunt of the selloff, with a gauge of related firms dropping as much as 3%.

Wharf Real Estate Investment Co. and Hysan Development Co Ltd. declined at least 3.7%. Implied volatility in the Hang Seng Index jumped 4.3%, the most in a week. Elsewhere, Cosco Shipping Ports Ltd. lost as much as 6.6%.

Among other losers on Thursday, Ping An Healthcare and Technology Co. fell 5.3% after a 20 million-share block trade. The stock is heading for the biggest one-day loss in more than three months.