Home
Stocks
In One Chart: Danger could be lurking in the most defensive corners of your portfolio
Prev Article Next Article

Defensive positioning makes sense in this market environment. Maybe too much sense, according to one market researcher.

After all, the U.S. bull market is getting long in the tooth, international trade headlines are all over the map, political tensions continue to ramp up and stocks just keep chugging into record territory.

But before you go ahead and bolster your portfolio with the kinds of assets that traditionally fare well during stormy markets, you might want to pay attention to the cautionary chart that Callum Thomas of the Topdown Chart blog is waving.

Here’s the chart that caught his attention: 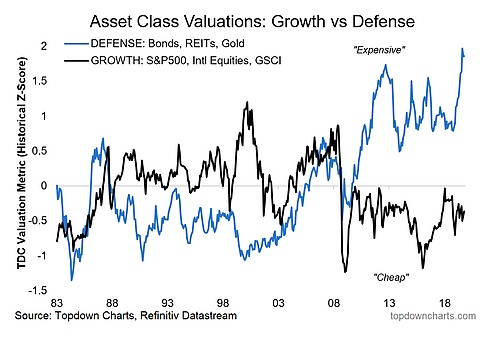 Thomas admits that his post “smacks of the scaremongering that a lot of pundits use to sell their subscriptions” but also believes the chart tells an important story.

“The traditionally defensive assets are looking very richly priced, and I guess you can’t blame investors for crowding in,” he said. “Simply put, it’s easy to explain why you’re overweight bonds, REITs, and gold when the global PMI is below 50 and the next selloff is only a tweet away.”

The trouble with herding into the assets believed to be safer than growth stocks is that those thinking they’re protecting their account could very well be exposing themselves to deeper losses. “In other words,” Thomas explained, “defensive assets could become a source of risk rather than a hedge against risk.” This is particularly problematic should the global economic outlook improve.

Then again, if a deep recession does hit, a defensive posturing will still likely serve it’s diversifying purpose, Thomas explained.

“But to me it’s another sign… that active asset allocation is a worthwhile function, even if just for risk management purposes,” he wrote. “It also means we ought to challenge traditional wisdom and apply some thoughtfulness rather than deferring to rules of thumb or correlations of bygone eras.”