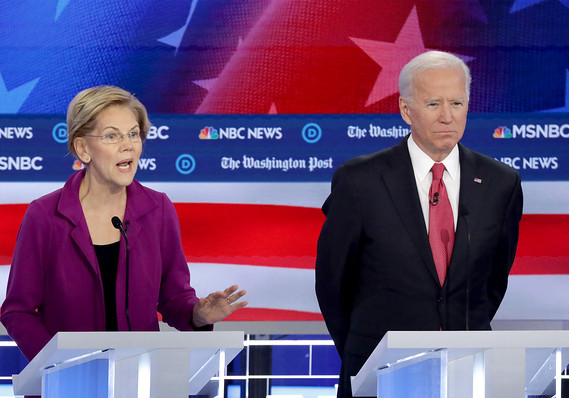 Sen. Elizabeth Warren used Wednesday night’s debate to rip President Donald Trump and Gordon Sondland, the ambassador to the European Union who told lawmakers that he “at the express direction” of Trump urged Ukraine to announce probes that would benefit the president.

‘We are not going to give away ambassador posts to the highest bidder.’

Debating nine fellow Democratic White House hopefuls, Warren questioned how Sondland got his post, and provided her own answer: He gave $1 million to Trump’s inauguration.

Earlier Wednesday, Sondland testified there was a “quid pro quo” between a White House meeting for Ukraine’s president and investigations Trump sought.

Invoking Sondland’s donation, the Massachusetts Democrat said “that tells us what is happening in Washington, the corruption.” Her comments represented a doubling down of a pledge she made in June, when she said she wouldn’t give posts to “wealthy donors or bundlers — period.”