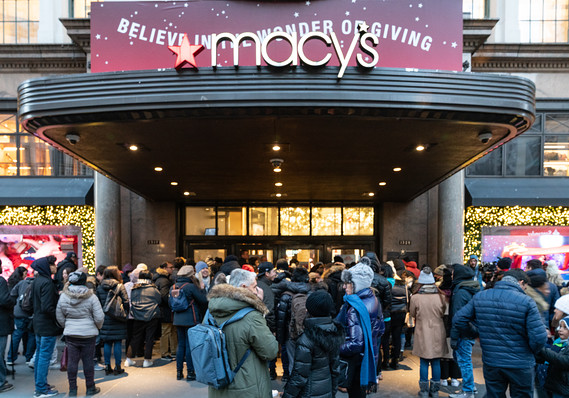 Heading into the fourth quarter, Macy’s says its off-price Backstage banner is ready for the holidays

Backstage was a bright spot in a third-quarter earnings report that otherwise missed sales estimates and cut guidance. Macy’s M, -1.93%   stock is down 1.6% in Thursday trading.

Macy’s reached its goal for the year and has opened 50 new Backstage stores, and locations open for more than a year were up mid-single-digits, according to Paula Price, Macy’s chief financial officer.

“I don’t think we see the limit yet in Backstage,” said Jeff Gennette, chief executive of Macy’s on the call, according to a FactSet transcript. “We see Backstage could play in every single one of our Macy’s mall footprints and we’re looking very carefully at free-standing as well.”

Read: J.C. Penney has good ideas but doesn’t have the resources for a turnaround, analyst says

“The competitive landscape for department stores remains challenging as off-price and discounters continue to relatively outperform,” said Christina Boni, Moody’s vice president. “Holiday performance for the department store sector appears more at risk, as it has been challenging for the leading players to realize traction in stabilizing profitability despite a healthy consumer.”

Macy’s Price was upbeat about Backstage on the analysts call, saying that business is ready for fourth-quarter holiday shopping.

“[T]here’s a lot of runway for off-price at Macy’s and we’re very bullish about the future of our Backstage business,” said Price.

For these reasons, Yanushevsky thinks Backstage should take a more primary role at Macy’s, even though Macy’s made a name as a full-price retailer.

“We like Macy’s focus on expanding off-price concepts which in turn we see shifting Macy’s sales mix to off-price over the next five years,” she said. “We’d like to see the pace of openings in the coming years to be at a minimum 50 per year in order for Macy’s to be able to compete with Ross Stores and TJX, which have been opening around 100 stores per year.”

TJX Cos. TJX, -0.42%   reported third-quarter earnings and sales that beat expectations on Tuesday.

“We came away from the Q3 call with even greater conviction in our bullish thesis on off-price and TJX specifically,” wrote Roxanne Meyer, managing director at MKM Partners in a Wednesday note about TJX. “The key to our thesis, which is top-line driven, is that we believe inventory access only gets better from here, which should support ongoing apparel growth and thus fuel upside potential.”

MKM rates TJX stock buy with a $70 price target, up from $62 previously.

Crossing over to off-price might not be a bad idea since what they’re doing now simply isn’t working, says Neil Saunders, managing director at GlobalData Retail.

“In our view, Macy’s failure on the sales line comes back to one central problem: the products it sells and the environments in which it sells them are not aligned with what consumers want,” he said.

Saunders says Macy’s has a number of locations that are “hard to navigate and do not meet the needs of the modern consumer in terms of services.” Moreover, the merchandise is “hit or miss.”

Macy’s blamed the poor showing on the late start to the cold weather, lackluster international tourism and lower-tier malls.

Don’t miss: With six fewer holiday shopping days there’s no time for impulse purchases, which is bad for retail

BJ’s Wholesale Club Holdings Inc. BJ, -7.58%  , which is down 6.4% in Thursday trading after reporting a third-quarter sales miss and cutting its guidance, also said the weather was a headwind.

Retailers have blamed the weather for bad results for ages. However Target Corp. TGT, +0.13%   Chief Executive Brian Cornell said on that company’s third-quarter earnings call on Wednesday that “apparel saw the most dramatic share gains in the quarter, with comp sales growth of more than 10%.”