To be sure, it makes a certain amount of sense that Charles Schwab SCHW, +7.37%, the largest discount brokerage firm in the U.S., would be interested in acquiring TD Ameritrade AMTD, +18.08%, the second-largest firm. The discount brokerage industry has become a very-low-margin business dependent on as wide a customer base as possible.

Yet those margins have been declining before our very eyes. With brokerage commissions now zero, and Schwab charging no fee to access its basic Robo-Advisor platform (known as Schwab Intelligent Portfolios), the firm has become heavily dependent on upselling clients to the premium version of this platform that charges $30 a month and provides access to a human being. It will need a huge base of customers to upsell enough of them to turn a significant profit.

It’s not clear that a firm even as large as a combined Schwab-TD Ameritrade will be able to do so. It will have to jump over not just one, but two, very high hurdles.

Of course, Schwab has another major contributor to its bottom line besides charging for its advice: Net interest revenue, which is the difference between the interest it earns on customer cash balances and what it pays. But note carefully that this line item is dependent on attracting clients to its advisory platform and then keeping them.

Challenge No. 1: Are there are enough potential customers?

The first challenge is one of sheer numbers: There are relatively few investors who have enough assets to be interested in paying for a Robo Advisor, but not so many assets that they already are clients of firms that cater to high-net-worth individuals.

There may not be enough investors in this sweet spot. According to the Economic Policy Institute, nearly half of U.S. families have no retirement savings at all. And among those who do, the median family’s retirement account contains just $60,000, according to the latest Survey of Consumer Finances from the Federal Reserve.

That means that close to three out of four families either have no retirement accounts or such small ones as to probably be uninterested in paying for the premium level of Schwab’s Robo Advisor platform.

That still leaves roughly one-quarter of families with retirement accounts larger than $60,000 and who potentially would be interested. But there aren’t as many potential customers in this quartile as might otherwise appear. According to the Federal Reserve, the average account size among families with a retirement account is $228,900, nearly four times larger than the median. That is a good measure of how much the distribution of retirement accounts is skewed by a few very wealthy families who presumably aren’t interested in paying Schwab or TD Ameritrade for advice.

A related trend is also worrisome. As you can see from the accompanying chart, the sizd of the median retirement account actually declined between 2013 and 2016. That amazing, since the stock and bond markets were up smartly over those three years; on a total return basis, for example, the S&P 500 index SPX, -0.17%   was up more than 20%.

Only the average account size rose, which means that it was only among the very wealthy that retirement wealth increased over that period. That indicates the distribution of retirement account wealth became even more unequal — and away from the sweet spot for a combined Schwab/TD Ameritrade. 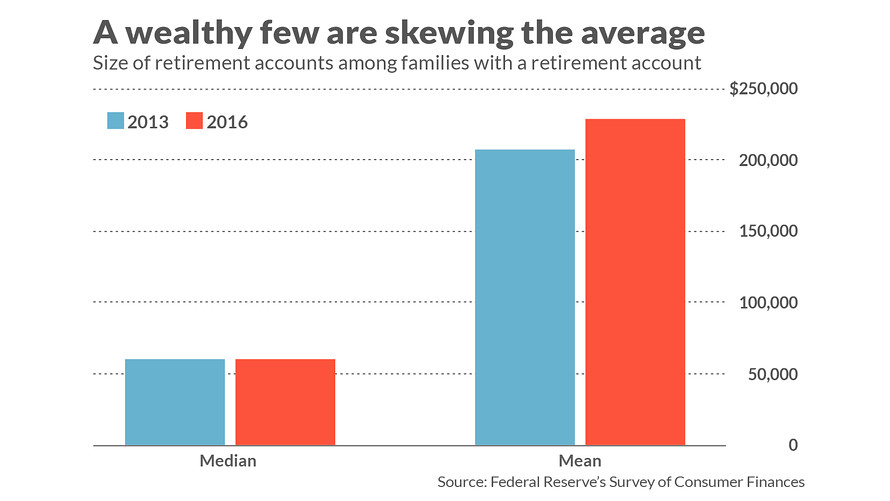 Challenge No. 2: The advice is unlikely to add value anyway

As if the small number of potential customers weren’t already a big enough problem, Schwab faces a second — and even bigger — challenge in trying to convince those customers to pay for the Robo-Advisor premium platform: Most investment advice is worthless.

This fact is already widely known, of course. My four decades of tracking the performance of investment newsletters found that more than 90% of them failed to equal the return of a simple index fund. Research into the performance of actively managed mutual funds finds equally dismal returns.

Many have countered by arguing that robo advisers will perform better than the advice provided historically by their human counterparts. But that’s damning by faint praise, according to Lawrence Tint, chairman of Quantal, a risk-management firm for institutional investors; until 2000, he also was U.S. CEO of BGI, the company that created iShares, now part of BlackRock BLK, -0.22%. “Being better than underperforming the market averages is a hard sell,” he said in an interview.

The bottom line? Success of a combined Schwab-TD Ameritrade is by no means assured. And it appears that it’s not taking the market long to recognize this uncomfortable truth. Though Schwab’s stock surged 13% premarket on news of the merger, by midday trading in New York it had given up nearly half that gain. And even with the day’s gains, both stocks have badly lagged the S&P 500 index this year.

Mark Hulbert is a regular contributor to MarketWatch. His Hulbert Ratings tracks investment newsletters that pay a flat fee to be audited. He can be reached at mark@hulbertratings.com.

More on a Schwab-TD Ameritrade combination:
Prev Article Next Article