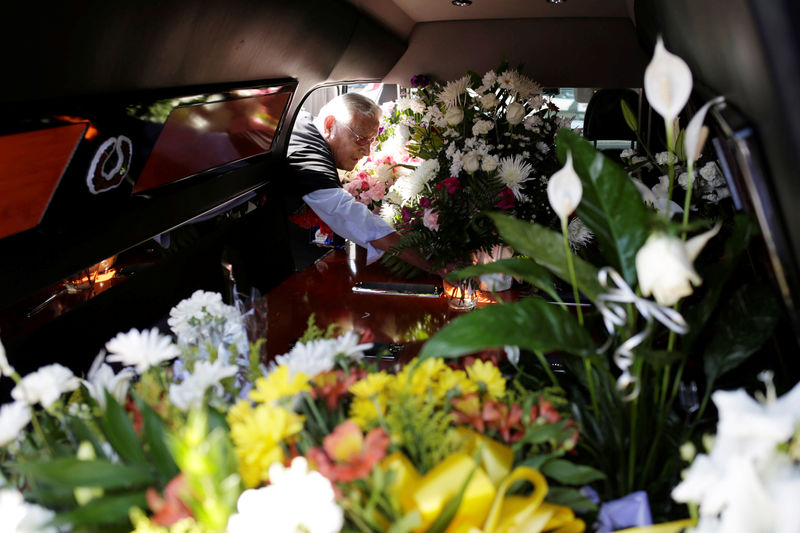 © Reuters. A man puts flowers inside a hearse of one of the victims of a mass shooting at a Walmart store during a tribute in El Paso

MEXICO CITY (Reuters) – Ten Mexican citizens have sued Walmart (NYSE:) over the shooting at a store in the U.S. border town of El Paso, Texas, that killed eight Mexicans and left eight more injured, saying that Walmart did not do enough to protect its customers, Mexico said on Wednesday.

The suspected gunman told police he was targeting “Mexicans” in the August shooting, which killed 22 people in total.

Mexico’s Foreign Ministry said in a statement that the lawsuit, which was filed in Texas state court in El Paso County, aimed to hold the retailer accountable “for not taking reasonable and necessary measures to protect its customers.”

“Through this lawsuit, the petitioners seek justice not only for themselves, but also security for the general public,” the Mexican ministry said in a statement.

A spokesman for Walmart said the company had yet to see a copy of the complaint and would respond appropriately in court.

“We will never forget this tragic event, and our condolences continue to go out to the everyone who was affected,” the company said in a statement. “Safety is a top priority and we care deeply about our associates and customers.”

The suit is being handled by the Law Office of Lynn Coyle, an El Paso-based firm, in coordination with the Mexican consulate general in the city. Lawyers at the firm did not immediately respond to a request for comment.

It was not clear from the ministry’s statement what relation the Mexican plaintiffs have to the attack, though the ministry noted that Coyle works with victims of the shooting.

The ministry’s statement did not detail on what grounds the plaintiffs seek to hold Walmart responsible for the attack.

The Mexican government also condemned the shooting, describing it as an act of terrorism against Mexicans.

“The government of Mexico will continue to use all the resources at its disposal to prevent such incidents from recurring and repair the damages suffered by the victims,” the Foreign Ministry said on Thursday.