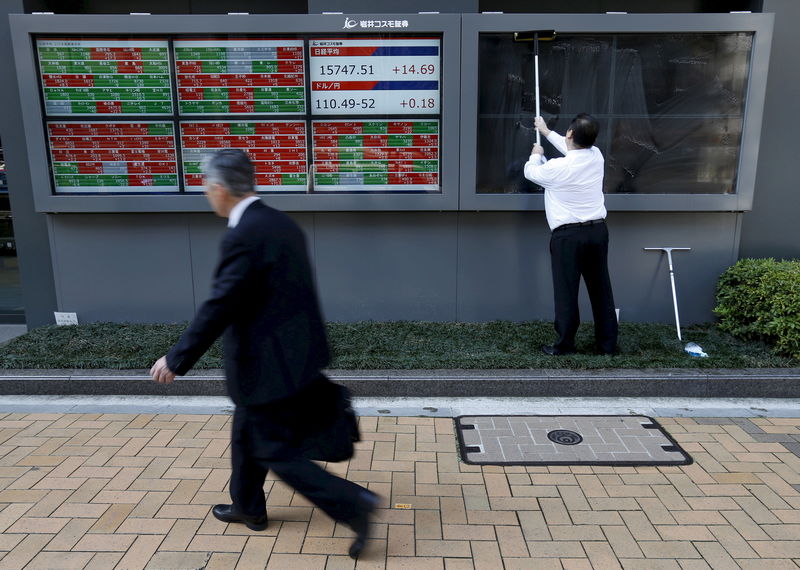 TOKYO (Reuters) – Global stocks took a beating on Thursday as a fresh row between Washington and Beijing over U.S. legislation on Hong Kong threatened to undermine their trade talks and delay a “phase one” deal that investors had initially hoped to be signed by now.

The U.S. House of Representatives on Wednesday passed two bills intended to support protesters in Hong Kong and send a warning to China about human rights.

The legislation, which has angered Beijing, has been sent to the White House for President Donald Trump’s approval. A person familiar with the matter said Trump was expected to sign it.

“China will surely take this as an interference into its domestic affairs and is likely to think it will no longer need to make concessions on trade,” said Norihiro Fujito, chief investment strategist at Mitsubishi UFJ Morgan Stanley (NYSE:) Securities.

The move came as trade experts and people close to the White House said completion of a “phase one” U.S.-China trade deal could slide into next year, as Beijing presses for more extensive tariff rollbacks, and the Trump administration counters with demands of its own.

Trump said on Oct. 11 that the deal could take as long as five weeks, and investors had initially expected an agreement by mid-November.

Asked Wednesday about the status of the China deal, Trump told reporters in Texas: “I don’t think they’re stepping up to the level that I want.”

Similarly in the currency market the yuan hit three-week lows, trading as low as 7.0450 to the dollar in onshore trade.

Tomoo Kinoshita, chief economist at Invesco Asset Management in Tokyo, said the market is unlikely to completely give up hopes on the trade deal.

“There have always been some uncertainties in trade talks but that won’t erase positive effects from signs of bottoming out in the global manufacturing sector,” he said.

The minutes from the Federal Reserve’s previous policy meeting published on Wednesday offered little guidance on what would cause policymakers to change their minds on the outlook after an increasingly divided Fed decided to hit the pause button in its easing cycle.

Oil prices also dipped, paring some of their 2% gains made on Wednesday after a better-than-expected U.S. crude inventories report and as Russia said it would continue its cooperation with OPEC to keep the market balanced.