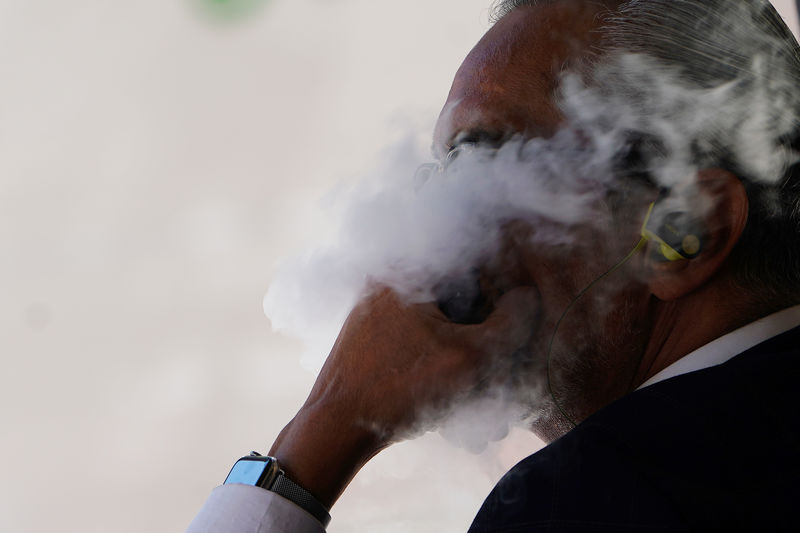 © Reuters. A man uses a vaping product in the Manhattan borough of New York

(Reuters) – U.S. health officials on Thursday reported 2,290 confirmed and probable cases and 5 more deaths from a mysterious respiratory illness tied to vaping, taking the total death toll to 47 so far this year.

Last week, the Centers for Disease Control and Prevention (CDC) recorded 2,172 cases and 42 deaths from the illness.

U.S. officials recently said vitamin E acetate — believed to be used as a cutting agent in illicit vaping products containing marijuana components — was found in all lung samples from 29 patients who were tested.

CDC has called vitamin E acetate a “chemical of concern” and recommended not adding it to e-cigarettes, or vaping products, while the investigation is underway.

Investigators had earlier pointed to vaping oils containing THC, the psychoactive ingredient in marijuana, as being especially risky.

As of Nov. 20, confirmed deaths were reported in 25 states and the District of Columbia, the CDC said. Louisiana became the newest state to report a death from the illness.

The highest number of deaths were from Illinois, which has so far reported 5 deaths and 187 illnesses.

The Trump administration announced a plan in September to remove all flavored e-cigarettes from store shelves, as officials warned that sweet flavors had drawn millions of children into nicotine addiction.

President Donald Trump will host a meeting on vaping at the White House on Friday with a range of groups, including industry and public health representatives, a White House spokesman said on Wednesday.