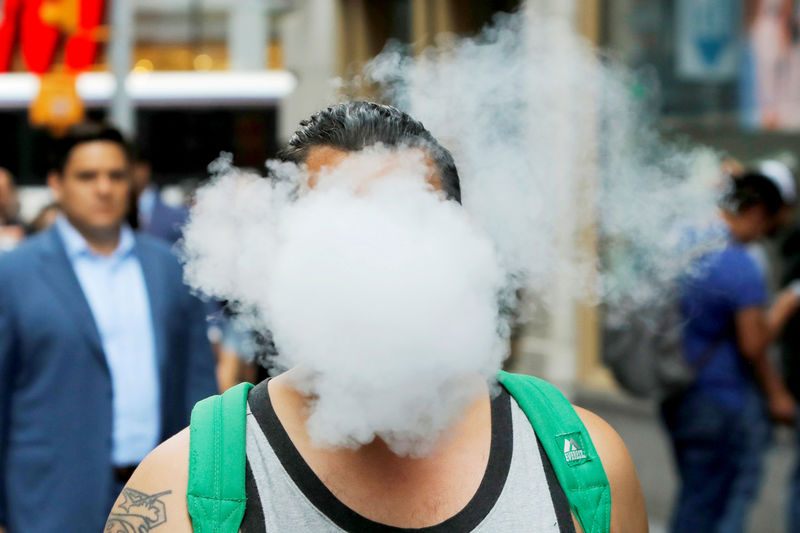 © Reuters. FILE PHOTO: A man uses a vape as he walks on Broadway in New York City

(Reuters) – A potential U.S. ban on e-cigarette flavors could result in a loss of more than 150,000 jobs and a direct sales hit of $8.4 billion, according to a report released on Friday by a vaping industry trade group.

Two months ago President Donald Trump’s administration announced a sweeping plan to ban all e-cigarette and vaping flavors except tobacco, but a final decision has not been made.

Trump is set to meet with a range of groups including industry representatives on Friday to discuss tightening of e-cigarette regulations.

Proponents of the ban have pointed to a dramatic rise in youths vaping, drawn by sweet flavors, and a surge in serious vaping-related illnesses.

More than 27.5% of American high school students use e-cigarettes, up from 20.7% in 2018, according to a survey by the Centers for Disease Control and Prevention.

E-cigarette companies have, however, opposed the ban, saying their products are not for children and that it would hit several jobs the industry has created.

If a ban on flavored vapes goes through, the majority of 13,480 independent vapor shops in the country would have to close, said the report by economist John Dunham & Associates, which was prepared for Vapor Technology Association (VTA).

Nearly 92% of vaping flavors in the independent distribution chain are those other than tobacco, said the report, adding the ban could also cost $22.4 billion in lost economic activity.

The VTA, with over a thousand members, represents e-cigarette makers, as well as retailers and distributors.