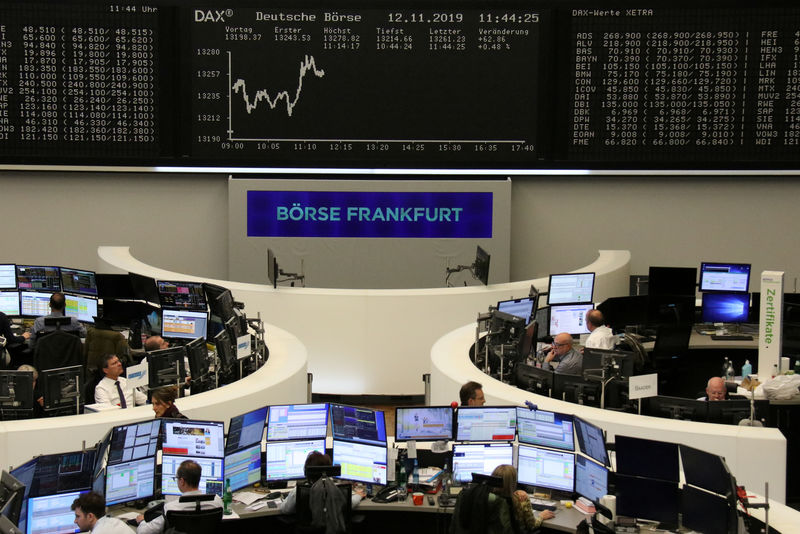 By Sruthi Shankar and Sagarika Jaisinghani

(Reuters) – European shares recovered on Friday, as better-than-feared manufacturing activity readings from major eurozone economies outweighed concerns about a U.S.-China trade deal that had sparked a selloff earlier this week.

The pan-European STOXX 600 index () added 0.4% and London-listed shares () outperformed with a 0.9% rise as trade-exposed miners, banks and energy companies rebounded from sharp falls earlier this week.

Risk of a deepening German manufacturing recession amid a prolonged U.S.-China trade tussle, a struggling car industry and uncertainties over Britain’s departure from the European Union has worsened sentiment among European investors.

However, Friday’s readings came as a relief even as the broader euro zone business growth almost ground to a halt as the services industry increased at a much weaker pace than expected.

“What we see reflected in the PMIs is optimism and market expectations that a phase one deal is still a very real possibility,” said Teeuwe Mevissen, senior market economist at Rabobank.

“But having said that, it remains to be seen what China’s reaction will be to the Senate bill regarding the situation in Hong Kong. That will put negotiations under pressure and make them more complicated.”

Despite Friday’s gains, the benchmark STOXX 600 index is set to close its first weekly decline in seven, retreating from near-record levels, as the standoff between the world’s two largest economies, prolonged protests in Hong Kong and weak global economic data dulled investor sentiment.

Among individual stocks, Italian broadcaster Mediaset (MI:) rose 2.2% after sources told Reuters that French media group Vivendi (PA:) is prepared to sell part of its stake in the firm at a loss in an attempt to reach a deal to end years of bitter legal disputes.

The new European Central Bank President Christine Lagarde said the euro zone needs to create more of its economic growth at home, including via greater public investment, but did not discuss monetary policy in her first major speech.