More than 165 million people are expected to go shopping between Thanksgiving Day and Cyber Monday this year, according to the National Retail Federation.

But if they’re not careful, they could get swindled by supposed deals and bargains — as was potentially the case for the roughly 35 million people who are still in credit-card debt from last year’s round of holiday shopping, according to an analysis from personal-finance website WalletHub.

Retailers, meanwhile, are feeling the pressure. Because of how late Thanksgiving falls on the calendar this year, there are six fewer shopping days this holiday season. That’s good news for shoppers looking to save money though. There’s less time to make impulse purchases and the compressed timeline has pushed retailers to roll out their best deals earlier.

“I’m calling it a shopper’s market,” said Sara Skirboll, shopping and trends expert at coupon website RetailMeNot. “We’re going to be able to take advantage of so many deals, discounts and promotions.”

To help you make the most of your post-Thanksgiving shopping, MarketWatch has put together a handy guide featuring of the best tips from retail and financial experts on how to ensure you come out of Black Friday and Cyber Monday a winner. 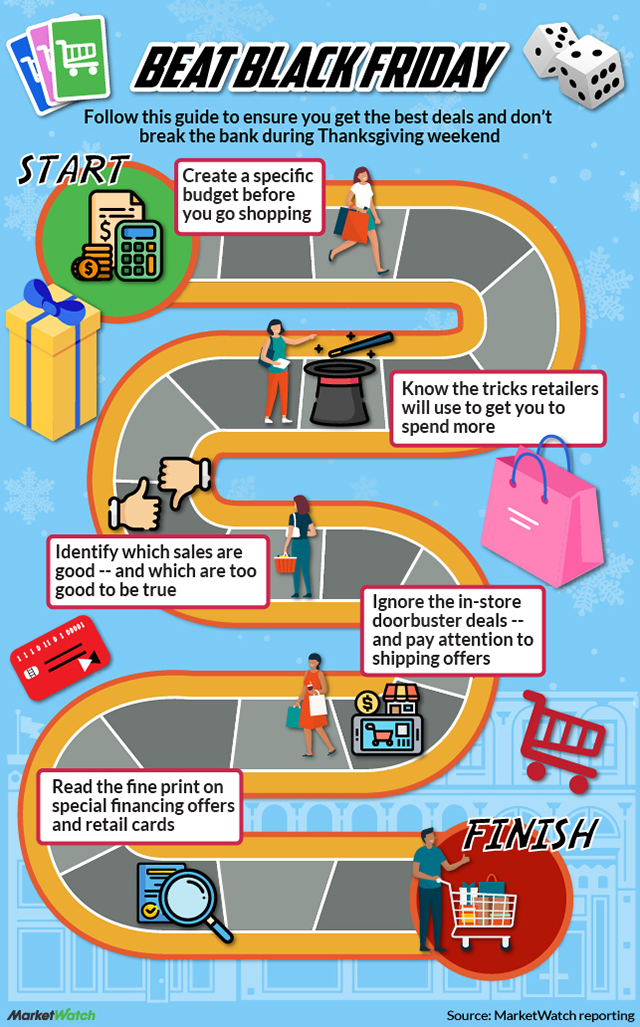 Give yourself the gift of a detailed spreadsheet

First and foremost, calculate how much money you can actually afford to spend on holiday gifts.

“This is the step most people skip,” said Tim Sheehan, CEO and co-founder of family debit-card company Greenlight. “Look at it holistically.”

It’s important to do this before you come up with the list of people you want to shop for — otherwise, your good nature could prevail over your common sense.

Next, take a page out of Santa’s book: Make a list, and check it twice. Create a spreadsheet of everyone you’d ideally want to get a gift for, prioritize that list and assign a dollar amount to each person. If you run out of money before you reach the end of the list, consider alternatives to traditional gifts, such as seeing a movie with the person or offering them a free night of babysitting. And don’t forget to budget for any taxes and fees that are tacked onto the sales price.

The skip most people skip when planning their gift-giving is setting a maximum budget.

Be upfront with loved ones about what you can afford. Sheehan is one of four children, and he and all of his siblings have their own families now. “In some years we backstopped buying gifts for each other because it can get crazy the number of people you have to buy gifts for,” he said.

Make it easy to stick to your budget. One way is to create artificial limits on how much you can spend. This can mean using cash only and divvying it up among envelopes so you avoid spending more than you want on one person. Or you can load your gift-shopping money on a prepaid card, so that you can’t overspend.

Let your smartphone be your friend. Use the calculator app to subtract money you’ve spent from the total budget you’ve set aside for holiday gifts. As you go along, take screenshots of how much you have left and make those images the background on your phone so you can quickly reference what money you can spend.

Retailers have a vast trove of tricks they use to get their customers to spend way more money than they would have wanted to otherwise.

Some of these psychological manipulations are plain to see, literally. Retailers will often position very cheap items at the front of the store — for instance, Target TGT, -0.83%  places a lot of $1 items near its entrance — to break the ice. Putting one of these items in your cart will prime you to spend more.

Similarly, there are all the cheap items — candy, sodas, reusable shopping bags — that retailers like Walmart WMT, -0.37%  will put at the checkout in an effort to get you to tack on a few more dollars to your final total.

But there are the more insidious strategies to watch out for. One of the most common relates to pricing. Retailers will often inflate an item’s price in the lead-up to a sales holiday so that when they apply a discount it can seem bigger. Back in 2014, MarketWatch found that J.C. Penney JCP, +1.85%  listed a higher original price on a popular blender than competitors like Best Buy BBY, +0.19%  and Amazon AMZN, +0.29%  , and then “discounted” the blender to the same price as those other retailers.

Similarly, the “original” price tags at discount retailers like Kohl’s KSS, -0.72%  may be made-up. Often the items sold at those stores were never meant to be sold at that price, but were instead always destined to end up on the bargain racks.

‘Put things in your cart and leave them there, browse around before you absolutely need to make the purchase.’

(“Original prices, as well as sale prices, are set individually by each retailer’s merchant team based on their customer base, sales events, promotional calendar, etc, therefore prices will vary retailer to retailer,” a J.C. Penney spokeswoman told MarketWatch at the time.)

Knowing retailers’ tricks isn’t just a matter of avoiding them. A savvy shopper can embrace some of these strategies to their own advantage. For instance, when a shopper puts items in an online shopping cart but then doesn’t buy them, many retailers will then follow up with an email offering an additional “cart abandonment” discount, said Michael Osborne, chief executive and president of retail consulting firm SmarterHQ.

“My advice to friends of mine is put things in your cart and leave them there, browse around before you absolutely need to make the purchase,” Osborne said. Lucky shoppers may then get these extra discount offers, which can help them save even more money when layered on top of holiday sales.

Know the difference between the good sales and the bad ones

Not all deals are created equally. Certain items won’t see the deepest discount during Black Friday or Cyber Monday. Some products are better to buy in January. Many department stores run “white sales” at the beginning of the year for linens, making that a better time to buy new sheets and towels. And fitness equipment and gym memberships are cheaper then as well, because companies aim to take advantage of people’s newly-formed New Year’s resolutions. As for Cyber Monday, here’s a list of what to avoid buying.

As for what you should consider purchasing on Black Friday, electronics are at the top of the list. This is indeed one of the best times of year to purchase items like televisions and video game consoles. In 2019, especially, smart-home products are expected to have some of the best discounts.

The brand name matters though — Apple AAPL, -0.27%  products are rarely discounted, and Amazon’s items were probably cheaper during Prime Day this summer.

When evaluating sales, don’t just consider the price, but also the popularity. Toys, for instance, tend to see the biggest discounts in mid-December as retailers aim to clear their inventory before Christmas. But by that point, stores may be sold out of the most popular toys. Therefore, snatching up a deal on Black Friday may not be the worst idea if it’s a must-have item for your family.

And this year, retailers have been rolling out their best sales well before Thanksgiving because of the abbreviated shopping season, which makes better deals later on far from a given. “The early bird definitely catches the worm,” Skirboll said. “If you see something you need for 40% off or more, get it now.”

Be on the lookout for unusual sales and deals. Menswear retailer Mack Weldon has a tiered loyalty program. After one order, customers receive free shipping on all subsequent orders. And then once their total spending hits $200 or more, they not only get free shipping but also 20% off every order for a year. Those savings in the long-term could beat the one-time sales offered by other stores, depending on a person’s shopping habits.

In the age of online shopping, many retailers continue to run doorbuster deals on popular electronics and home appliances in an effort to get people to shop in brick-and-mortar stores rather than online. The good news for the planners out there, Osborne said, is that fewer retailers are keeping their doorbuster discounts a secret, because people want to know in advance what they could get.

But you may want to ignore the doorbuster deals altogether. Inventory on these items tends to be fairly limited, so unless you’re one of the first people in line there’s a decent chance you’ll miss out on the offer altogether.

Watch for special discounts for choosing to buy an item online and pick it up in store.

Instead, pay attention to the incentives retailers offer in terms of shipping. More and more places are offering free and fast shipping to compete with Amazon. Be sure to read the fine print though, since sometimes you need to meet a minimum purchase amount to get the deal.

In the era of free shipping, retailers have another trick up their sleeves to get people to stores: The in-store pick-up option. And this can be attractive during the holiday season. For starters, you can get the items you need almost immediately, so there’s no worries about shipping delays or stolen packages.

But many retailers will sweeten the deal by offering a coupon for any in-store purchases made after buying something online, which can spread the savings even further. Plus, there are always certain benefits to getting an item in person. “You can see it before you pick it up, and return it before leaving,” Osborne said.

Don’t miss: Gobble it up! Thanksgiving turkeys are the cheapest they’ve been in 9 years

Think twice before signing up for a special financing offer

Stores will try to encourage the purchase of big-ticket items during the holiday season by offering special financing. As always, the devil is in the details.

In many cases, these 0% interest financing are in reality deferred-interest plans. This means, that if the consumer pays off the full balance before an introductory period, typically 90 days, they won’t pay interest. But if they don’t reach that deadline, they will owe interest on the full original balance, not just the amount they have left after the introductory period.

Similarly, some companies will offer an additional discount if you sign up for their store credit card at the cash register. These cards can carry extremely high interest rates though — so if you don’t pay the balance off in full when payment is due, you’ll easily end up owing more in interest than you saved via the original discount.